Out of The Blocks

This Isn't What I Used to Do

Stories about surprising second acts, from the owner of a pinball museum, a Kashmiri journalist exiled to a snack counter, a washer repairman with a checkered past, a funeral director who stumbled into the job after he married into the business, a former gang member who now runs a religious radio station, a guy who turned his rock n roll music studio into a corporate voiceover business, a woman who left an abusive man and found herself in the process, and a handyman who moonlights as a standup comic.

Out of the Blocks is produced with grant funding from the Corporation for Public Broadcasting, the Cohen Opportunity Fund, The Hoffberger Foundation, Patricia and Mark Joseph, Shelter Foundation, Inc, The Kenneth S Battye Charitable Trust, and The Muse Web Foundation.

Aaron Henkin
Aaron creates and produces original radio programs and podcasts for WYPR. His current project is The Maryland Curiosity Bureau. Aaron's neighborhood documentary series, Out of the Blocks, earned the 2018 national Edward R Murrow Award. His past work includes the long-running weekly cultural program, The Signal, and the Smithsonian Folkways Recordings series, Tapestry of the Times. Aaron's stories have aired nationally on NPR's Morning Edition and All Things Considered.
See stories by Aaron Henkin 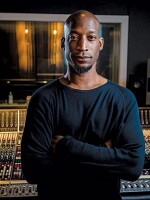 Wendel Patrick
Wendel Patrick has been referred to as "David Foster Wallace reincarnated as a sound engineer" by Urbanite Magazine and as "wildly talented" by the Baltimore Sun. He has been referred to by XLR8R magazine as "a hip-hop producer that could easily make any fan of Squarepusher, Boards of Canada, or Madlib flip out." The alter-ego of classical and jazz pianist Kevin Gift, Wendel Patrick is rapidly making a name for himself as a producer to be recognized. His five albums, "Sound:", "Forthcoming", "JDWP", "Passage" and "Travel" were all produced without the use of samples, with Patrick playing every note of every instrument. What is perhaps most astounding and perplexing to listeners is that there are actually no instruments...he crafts all of the instruments, and every note, electronically.
See stories by Wendel Patrick