For Pugh, it's a race to primary day 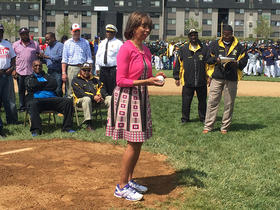 With the primary election looming on Tuesday, this weekend was the start of a sprint to the finish line for state Senator Catherine Pugh in her bid to be the Democratic nominee for mayor.

For the occasion, she swapped her usual heels for blue and white running shoes. But she said the shoes are a regular part of her routine.

“I’m a runner! I started the Baltimore Marathon,” she said. “Come on.”

Pugh donned the shoes for the James Mosher Baseball Opening Day Parade, after which she was one of several elected officials to throw a ceremonial first pitch.

She seemed to operate at a sprint all of Saturday. Her schedule was packed with events, from interviews to endorsements to a get out the vote event at Coppin State University.

Even during the James Mosher parade, Pugh was constantly on the move — reluctant to pass up the opportunity to shake a voter’s hand and pose for a picture.

“We’re coming right up in the end days before the primary, and it really does make a difference that people can reach out, touch, and see the person they want to be mayor,” said Pugh’s campaign manager, Anthony McCarthy. “They really want to know that they’re accessible.”

Pugh said she plans to keep the momentum right up until the end.

"You'll see the same thing that we've been doing for the last at least four, five or six months,” she said. “That's knocking on doors, talking to people, running like we're 10 points behind, delivering our message to the public about moving our city forward and not backwards, being more inclusive as a city, understanding that when we lift the least we lift all of us.”

What’s clear is that the finish line is in sight, regardless of who comes in first.