Preakness runs in place at Pimlico Saturday, but fans tout prospects for makeover 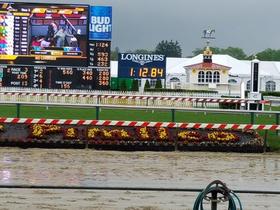 Oh sure, the second day of Pimlico’s 2016 season was rain-soaked and gloomy. It was so bad the small scrum of spectators for the opening race didn’t even bother to leave the comfort of the freshly scrubbed clubhouse, watching the action on relatively new flat screen TVs instead.

Try as they might, the track owners cannot turn this 146-year-old building into a glamour palace without a complete remake. They are mostly just hoping the toilets don’t fail again this year.

But as the Maryland Stadium Authority begins a study of whether Old Hilltop is worth saving, you might want to put your money on brief boutique seasons for a rebuilt Pimlico, supported by year-round racing at Laurel Park and three new off-track-betting spots around the state. Sal Sinatra, president and general manager of the Maryland Jockey Club, which owns both race tracks, says that’s where things appear to be heading.

"There’s no reason this facility couldn’t be a stand-alone facility where you come out a couple months out of the year, or twice a year or use it as a festival," he said. "There’s a lot of things you could do. It just depends on how it works out with the community and economic development.

"And really," he added, "that’s what the stadium authority is going to come back with and let us know what the feasibility is."

The driving force behind the $280,000 study, financed by the state, the Jockey Club and the Baltimore Development Corporation, was Delegate Sandy Rosenberg, whose West Baltimore district includes Pimlico and some of the city’s most impoverished neighborhoods.

He says short, annual meets at a rebuilt racetrack featuring high profile races like they hold in Saratoga, New York, would be a great model for Pimlico.

"We’ve also had conversations about what other events could take place at Pimlico, in the infield or in the new facility as an event space that would be compatible with the residential neighborhoods that surround the racetrack," Rosenberg said.

Still far from decided is who would pay for rebuilding the Pimlico grandstand and clubhouse, complete with the luxury suites Sinatra says are mandatory to attract the kind of money that pours into Churchill Downs for the Kentucky Derby. Even so, Rosenberg says prospects for the makeover are much better than they were a few years ago.

"There’s nobody, no potent political force in Annapolis that is seeking to move the Preakness," he said. "Now, that doesn’t mean you’re going to have the votes to pay for it, to pay the state’s share. That doesn’t guarantee that."

But it does make approval of the project easier, he said.

Workmen clearing mud off tractors in Laurel Park’s stable area send the clearest signal of where the Jockey Club sees its future.

While the Pimlico season has quietly shrunk to 28 days this year, horse racing at Laurel, which boasts better tracks as well as a modernized clubhouse, is effectively operating year round. Sinatra says he has spent more than $22 million there on mostly cosmetic improvements, including barns that house 1,100 horses. And the betting handle at Laurel is booming.

But throughout Maryland’s horseracing community, fingers are still crossed that Saturday will bring a safe, successful—and sunny--Preakness.