Celebrating 20 Years of Commitment to Community
In 2022, WYPR will celebrate its 20-year anniversary on-air, online, and in events with the community. Over the next year, you'll learn about the history of WYPR and get a glimpse of what's next.

A timeline of WYPR's 20 years

For the past two decades, Your Public Radio, WYPR 88.1FM, has been the free, public resource people have tuned-in to listen, learn, share, discuss, debate, reminisce and celebrate. From politicians, authors and actors to community members and advocates, medical experts, cultural and business leaders, entertainers, sports figures and more, WYPR has welcomed esteemed guests to its Baltimore studio and to its airwaves to share these conversations with the community. Now, as WYPR begins its 20th year, the station will celebrate its platinum anniversary with a variety of in-person and virtual events, special on-air programming, fundraising campaigns and a host of unique activities for listeners all year long.

“Our community of members and listeners is the reason that we are so successful,” said LaFontaine E. Oliver, WYPR’s president and general manager. “We have one of the best performing sustaining programs in the country with almost 70% of our members giving monthly donations. Their support has allowed the station to grow to the point where we are more than terrestrial radio - our content now reaches audiences on-air, on-line, on-demand, on mobile and in the community.”

Over the years, WYPR, its programs, podcasts and staff have earned countless industry awards – locally, regionally and nationally – including two National and three Regional Edward R. Murrow awards in the past four years and the 2014 Alfred I. duPont-Columbia University Award – and has been regularly ranked as the number one news/talk radio station in the region, as tracked by Neilson Audio.

“We have been at the forefront of every major issue that our community has faced, bringing our listeners perspectives that have educated and enlightened,” said Andy Bienstock, WYPR’s vice president and program director, who has been with the station since its founding and before when it was a student run station with Johns Hopkins University. “In fact, I can’t recall any topic that we haven’t covered. I look forward to sharing the next 20 years with our listeners as we strive to be more reflective and essential in even more aspects of the lives of Baltimoreans.”

WYPR was launched through the efforts of a group of local citizens who came together to raise money and secure the bank loan for the purchase of WYPR when the station, WJHU, was sold by Johns Hopkins University in 2001. Because of their vision and leadership, these Founding Board Members and community members helped secure the future of public radio for Baltimore and Central Maryland.

To date, the station has a full-time staff of reporters, editors, producers, fundraisers, administration professionals and others who are responsible for the production of two daily talk shows: On the Record and Midday, special programming to address pressing community issues, a burgeoning news department, ground-breaking podcast selections and ever-increasing digital offerings. WYPR launched its digital presence in 2004 and has grown to include expanded streaming, an app and a robust podcast program. In addition, the station has grown its social media presence with now more than 40,000 people following on Twitter, Instagram, Facebook, LinkedIn and YouTube.

As a non-profit, public radio station without the backing of an educational institution or the state government, like many other public broadcasting outlets, WYPR has always relied heavily on its listeners for support. “In the most recent fiscal year, support from donors accounted for over 60% of WYPR's budget for the first time ever, proving that this really is a station for our listeners, by our listeners, because of our listeners,” said Oliver.

Currently, WYPR counts approximately 18,000 individuals among its financial supporters, the majority of whom give only $10 a month. The station looks forward to reaching a goal of 20,000 members in 2022 to mark the 20th anniversary occasion.

In 2019, the station welcomed LaFontaine E. Oliver as its new president and general manager, taking the helm from Tony Brandon, who led the station since its founding 2002. During his first year, Oliver committed to making Your Public Radio a destination place to work through a focused strategy to improve human resource function and workplace culture, while reinvigorating the newsroom by hiring a new executive director of news and helping to launch a new health reporting desk and the weekday podcast, The Daily Dose, as a vital source of the most relevant news to the community about the COVID-19 health pandemic and the state's response. Recently, Oliver was appointed by NPR’s Board of Directors as its Chair of the Board for a second term.

Led by Oliver in 2021, WYPR took its next major step in its commitment to community by providing expanded music, arts and cultural programming with the acquisition of WTMD 89.7FM, which had been operated by Towson University Public Media, Inc., a non-profit organization, in affiliation with Towson University since 2014. The deal for the purchase of WTMD closed in November of 2021 bringing the powerhouse local public radio stations together, while preserving WTMD’s beloved music discovery format and service. 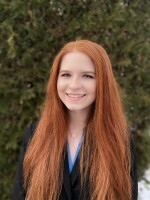 Maddie Bristowe
Maddie is WYPR’s Digital Communications Associate, helping with all things digital for the station. She is a recent graduate of Fordham University where she studied Communications and Economics. Maddie started in public radio during her time at Fordham at 90.7 FM WFUV, New York’s music discovery station. She produced the weekly radio show/podcast Cityscape, an exploration of the people, places, and spirit of New York City. She also produced two award-winning audio documentaries for WFUV, Back to the Garden: Remembering Woodstock and You Should Know Their Names.
See stories by Maddie Bristowe