As much as we’d like to believe otherwise, death is an inescapable part of life. On this edition of The Weekly Reader, our book critic Marion Winik reviews two new novels that explore the topic with grace, wit and intelligence: Sigrid Nunez's What Are You Going Through and Yaa Gyasi's Transcendent Kingdom.

What Are You Going Through, by Sigrid Nunez, Riverhead

Lisa Morgan
Lisa Morgan covered the local arts community as co-creator and host of WYPR’s award-winning program The Signal from 2004 to 2015. She has created and produced many programs for WYPR, including news stories, features, commentaries, and audio documentaries. She taught audio production at Goucher College and has done voice-over work for a variety of clients. The Weekly Reader is her latest project.
See stories by Lisa Morgan 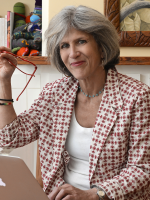 Marion Winik
Longtime All Things Considered commentator (1991-2006) Marion Winik is the host of The Weekly Reader radio show and podcast. She reviews books for Newsday, People, Kirkus Review and other venues and is a board member of the National Book Critics Circle. She is the author of First Comes Love, The Glen Rock Book of the Dead and seven other books. Her Bohemian Rhapsody column at BaltimoreFishbowl.com has received the "Best Column" and "Best Humorist" awards from Baltimore Magazine, and her essays have been published in The New York Times Magazine, The Sun and many other publications. She is a professor in the MFA program at the University of Baltimore. She has appeared on Today, Politically Incorrect and Oprah. Other honors include an NEA Fellowship in Creative Nonfiction, and the yearly "Best Local Writer" Award from the Austin Chronicle from 1993 - 1997. More info at marionwinik.com.
See stories by Marion Winik