Will UMD's Cole Field House Have A Second Life? 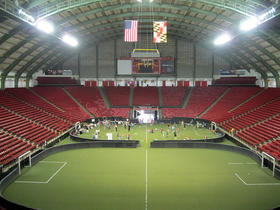 Signs of intelligent life are starting to emerge from College Park. First, there was the August announcement that the school would guarantee scholarships to student-athletes until graduation, regardless of how they perform on the playing field. Then, there was the decision of the Board of Regents of the University System that coaches’ bonuses would be tied to the academic performances of their teams. Now comes word that one of the great and historic buildings in all of college athletics may get a second life.

For parts of five decades, Cole Field House was literally and figuratively the heart of the Maryland campus, the pulse point of all things Terrapin.  In those hallowed halls, All-Americans Len Bias, John Lucas, Tom McMillen, Len Elmore and Vicky Bullett plied their trade. Lefty Driesell, Gary Williams and Chris Weller achieved fame there as legendary coaches. But it was also the spot where a young New Yorker named Lew Alcindor, who would later be known as Kareem Abdul-Jabbar, would see his Power Memorial High team’s 71-game win streak snapped in a 1964 loss to DeMatha.

It was the arena at which college basketball history was made, when, in 1966, a Texas Western team became the first with five black starters to capture a title, winning the championship over vaunted Kentucky. Six years later, a ping pong match between teams from the United States and Communist China became the first sporting event involving the two nations. And, it was also the place where thousands of Marylanders took part in high school and college graduation ceremonies, present company included.

Not much has happened in Cole since the basketball teams as well as the wrestling and volleyball squads took up residence in a shiny new facility across campus in 2003. However, news emerged last week that the 14,500 seat basketball mecca may become the indoor practice facility for the football team, which is the only squad in the Big Ten not to have such a building.

Multiple outlets reported that the Board of Regents is considering a proposal to convert Cole to football usage. Costs for the conversion vary, starting at around $50 million. Williams, in his new role as athletic department fundraiser, is trying to line up donors for the project, one of which will almost certainly be Under Armour CEO and founder Kevin Plank, a Maryland graduate and former football player.

The Big Ten move still smells to high heaven and giving new life to Cole Field House won’t completely remove the stench. But it just might provide a breath of fresh air to a great building.