Is Peter Angelos Reverting To His Old Ways With The Orioles? | WYPR
WYPR 88.1FM HD1

Is Peter Angelos Reverting To His Old Ways With The Orioles? 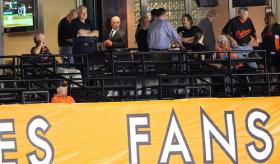 Under normal circumstances, sports fans and teams from Baltimore don’t have to take a back seat to anyone around the country, least of all Bostonians. And we surely don’t need their advice.  But a column in a Boston newspaper last week offered counsel to the Orioles and their fans that made perfect sense.

The headline of the column, written by Nick Cafardo, the Globe’s national baseball writer, summed things up perfectly.  The headline: “Orioles owe it to fans to take their best shot.”  That sentiment is true for any sports team on any level, but the admonition to the Birds is especially apropos now.  As you no doubt remember, the Orioles wandered in the pit of irrelevance for 14 years, finishing below .500 in each of those seasons from 1998 to 2011, the longest stretch of futility in franchise history.  And then came the miracle of 2012, when the Birds won 93 games, finishing second in the American League East and beating the defending league champion Texas Rangers in the wild card game.  That the Orioles lost to the Yankees in the Division Series hardly mattered. Baseball was relevant again here, a feeling only strengthened with this summer’s run.  When 2013 ended, the feeling was with a little tinkering here and there, the Orioles would be right back there come spring to battle the Yankees, the Rays and even the newly minted world champion Red Sox.

But as the fall has yielded to winter, a decided chill has ended the warm glow of September.

The team traded closer Jim Johnson to Oakland in a move that felt less about his penchant for blowing saves and more about not wanting to pay him nearly $11 million in 2014 had Johnson won in salary arbitration.  When it appeared they had Johnson’s replacement, free agent Grant Balfour, the Orioles backed out of the deal, citing concerns with some of his medical tests.

To Cafardo’s way of thinking, the nixing of the Balfour deal, as well as the failure of the team to sign any hitters to fortify the lineup, points to one man, owner Peter Angelos.  Cafardo suggests that Angelos is attempting to do things on the cheap, to make modest if not imperceptible improvements, while banking in the dough from higher attendance and a solid television deal.  As he writes, the Orioles are one starting pitcher, one closer and one hitter away from challenging for the division title. So, to quote, Cafardo, “why are they allowing this opportunity to slip away?”

The last two years have felt like the scene from the Wizard of Oz where Dorothy and the gang make their approach to the Emerald City. But only Angelos can give general manager Dan Duquette and manager Buck Showalter the tools they need to make the final push.

As Cafardo writes, the moon and stars could align and the Orioles could win this spring.  But Angelos has to prove to the fans that he wants to win. And he shouldn’t need a guy from Boston to remind him of that.