The night a mystical killer murders his family, a child toddles off into a graveyard, where he's adopted by a loving, even-keeled ghost couple. The premise for The Graveyard Book is macabre, but author Neil Gaiman has a strange ability to make otherworldly characters quaint — loveable, even — and the story is anything but grave. Children as young as 9 will enjoy this sweet, funny and gentle tale; adults will appreciate its deeper undertones.

Gaiman is the author of the ground-breaking (rocked-my-world) comic Sandman and the best-sellers Anansi Boys and Coraline. (The latter is being made into a stop-action animated motion picture, with Dakota Fanning voicing the lead.) In the past, he's personified Death as a punk-rock chick and the Dream King as her brooding, self-conscious brother. Among Gaiman's fans are Tori Amos, who sang the line, "...me and Neil'll be hanging out with the Dream King" on her breakout album, Little Earthquakes. The invention of immortal folk who readers feel they might like to kick back with may be this prolific, tousle-haired, ex-pat British author's contribution to world literature.

Dave McKean, an artist famous for comic-book and CD covers, provides excellent, off-kilter inkbrush illustrations. Showing us the graveyard through the boy's eyes, he makes rows of lonely tombstones seem safe and homey. Content to allow Gaiman's writing to create the characters, McKean gives us a world of comfortable, haunted ruins.

Though he lives among the dead, young Nobody Owens, nicknamed Bod, has his ghostly parents, an undead guardian called Silas and 300 ghosts to watch over him. "It is going to take more than just a couple of good-hearted souls to raise this child," says Silas. "It will ... take a graveyard." Bod goes on odd adventures: A young girl adopts the boy dressed in a winding sheet as her imaginary friend, and he's abducted by some hilarious and fairly disgusting ghouls. But the real fun lies in watching Bod's extended, disincarnate family come to terms with a living child, teaching him to read from gravestones and puzzling over foodstuffs like bananas.

There's a sense of peace that comes from reading Gaiman; in his stories, the things that scare us aren't impervious to our humanity. The nonliving in The Graveyard Book, who expect to stay the same through eternity, grow as people. Bod's parents change profoundly, as does Bod's first crush, the young witch-ghost Liza. And when Bod tells Silas that he, Bod, has danced with Death herself, his powerful, lonely guardian, who can neither live nor die, suffers a moment of heartbreak. The Graveyard Book may make children want to play in cemeteries, but it will make adults crack a knowing smile. 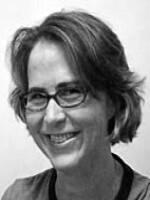