In A 'Berserk' Biopic, A 57-Year-Old Plays Celine Dion At Nearly Every Age — Even 12

(SOUNDBITE OF SONG, "MY HEART WILL GO ON")

CELINE DION: (Singing) Every night in my dreams, I see you. I feel you.

KELLY: The movie has earned these descriptions in part because it's star, who is 57 years old, plays Celine Dion, who is 53 years old, at nearly every age of the singer's life, including kindergarten. Rachel Handler reviewed the movie for Vulture and New York magazine. She's on the line now from Cannes in France. Hey there, Rachel.

RACHEL HANDLER: Hello. Thanks for having me.

KELLY: All right. So just - I'm trying to get my head around this. This is a movie inspired by Celine Dion's life, but Celine Dion is not involved in any way. Is that right?

HANDLER: Yes. It is an unauthorized movie about Celine Dion. It says it's a fiction freely inspired by her life, but it's pretty much paint by numbers, you know, sort of going through her entire career and her romance with her husband, who's named Guy-Claude in this version. And her name is Aline Dieu, not Celine Dion, which is French for Aline God. So I feel like that's a really good sort of indicator of where this is all going (laughter).

KELLY: And where is this all going? You were one of the reviewers that found this movie - sounds like both compelling and utterly bonkers.

HANDLER: I had very high expectations. I really love Celine Dion. And I think Celine Dion is kind of a camp figure already. Like, she's very, very funny and strange. And so the movie kind of is on her wavelength a little bit. It's it's just super, like, kooky and goofy. And it's relatively straightforward, but then there are these moments that are so, so bizarre. Like you said, she plays her when she's, like, 5 years old. This 57-year-old actress plays Aline - Celine - when she's 5. And so you see from behind what looks like the silhouette of a normal child. And then when the kid turns around, suddenly it's this shrunken adult, and it's very uncanny and strange.

KELLY: Can we just stick to the kindergartner moment for a second? I'm just - it does sound weird. Does it work just on a, you know, cinema, movie level?

HANDLER: I mean, it depends what you mean by work. I don't - I couldn't speak to the intention of the filmmaker, Valerie Lemercier, who is also the writer and the director. But, you know, it works in a way that the whole thing becomes very surreal. And it kind of - it kind of just pitches into this tone that you're instantly sort of carried away on this very ridiculous journey. It sets the tone pretty well, I would say, because you're like, OK, this is going to be a weird movie.

KELLY: Tell us more about Valerie Lemercier, who - she's the star. She directs. She's all over this movie. Who is she? Why did she make this film?

HANDLER: She's sort of a French sort of Ana Gasteyer, Tracey Ullman type. I think she does a lot of imitations and impressions. She's a comedian. She's an actress. She's a singer. So she seems to be just like an incredibly devoted fan - really committed, and you've got to respect that.

KELLY: Does she sing in this movie? Because imitating Celine Dion's voice would be quite the challenge.

HANDLER: So she lip-syncs to the sounds of a soprano named Victoria Sio, I believe, who does a really good Celine impression. But it's not, like, exactly the same. You can tell it's not Celine, but it's very, very close. It was very impressive. But - and she's also an amazing lip-syncer. I couldn't really tell if it was her singing until the end.

KELLY: Just take us inside the premiere. The audience - I mentioned they were crying. I watched the trailer for this, and it looked like a - just a straight biopic. I would have had no idea of quite how surreal it got. It sounds like you all didn't know what you were in for either.

HANDLER: Yeah. So I don't think anyone had any idea what we were in for. And I think everybody was just - I teared up a few times. I laughed. It was - I was on the ride, and I enjoyed it for sure. And I think the general consensus was sort of bewilderment and delight.

KELLY: Are the rest of us going to get to have this rollercoaster of bewilderment and delight? Will there be a wider release outside of Cannes?

HANDLER: Right now, it only has a release date in Europe and in Canada. And there is no American distributor yet, but I'm praying that, like, Netflix picks it up or something like that.

KELLY: That is Rachel Handler, features writer for Vulture and New York magazine. Thank you so much.

HANDLER: Thank you. This was great.

(SOUNDBITE OF SONG, "IT'S ALL COMING BACK TO ME NOW")

DION: (Singing) Baby, baby, baby, when you touch me like this, when you hold me like that, it was gone with the wind, but it's all coming back to me. Transcript provided by NPR, Copyright NPR. 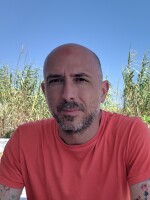 Miguel Macias
Miguel Macias is a Senior Producer at All Things Considered, where he is proud to work with a top-notch team to shape the content of the daily show.