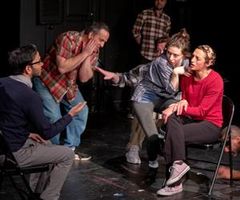 Want to know what the future of comedy in Baltimore looks like? Come see a comedy show celebrating the highwire act of improv, The Harold. Three Harold Night teams create a series of scenes from a single audience suggestion each week. We're a non-profit! Baltimore Improv Group (BIG) serves the city as it's leading non-profit improv comedy venue. BIG began in 2004 and now entertains with over 120 shows each year. With an annual audience of over 5,000 people, over 100 regular performers present audiences with shows every night of the week. As part of Young Audiences of Maryland (YAMD), BIG performs in assemblies and teaching residencies in Maryland schools. The BIG Theater opened in October 2017 in Station North. The theater offers 3,000 square feet of space for shows; classes and workshops for adults, kids and teens; a podcast studio. BIG shows include improv comedy, stand-up, sketch, and more. Free shows every night of the week Posted with EventRoar.com