In a media landscape that can still be pretty awful for Muslims, , a new podcast from KPCC, aims to give Muslims a space to define their own identities outside of stereotypes and broad generalizations.

Over the course of the series, host and producer Misha Euceph interviewed 22 people, all Muslims, about the defining moments of their lives. While the show dropped episodes every weekday of Ramadan, "Tell Them, I Am" doesn't really have anything to do with the holiday. "If somebody released something during Christmas time or during Hanukkah," Euceph says, "they wouldn't necessarily be asked about like, what are important aspects of Christmas or Hanukkah."

It's in each guest's hands how much they want to talk about culture or religion; for some it's a central part of their story, for others it's mostly incidental. Tan France of Queer Eye talks about his first big "I told you so," which involved his older brother and a metal fan. Ramy Youssef, creator of the Hulu show Ramy, talks about the medical condition that catalyzed his acting career. Alia Shawkat talks about the extremes of her stoner-y teenage rebellion, including borrowing urine to cheat a drug test (Spoiler: It didn't work).

And every episode of the podcast offers glimpses into Euceph's story: the fashion she endured to be more popular in middle school; the glamour she didn't quite inherit from her mother; the drive to prove people wrong that sent her up actual mountains.

The idea for Tell Them, I Am has been brewing in Euceph's head for at least a decade, maybe longer. She says that when she moved to the U.S. from Pakistan in 2003, being Muslim went from the default to a label that eclipsed her entire identity. The name of the show is about transcending that — it comes from a story in the Bible, where God responds to the question, "Who are you?" by saying, "You can tell them that I am 'I am.'" Not a name, not a category, simply, "I am."

We called up Euceph to ask about the highlights of her interviews — our interview has been edited and condensed for clarity.

There's been a lot in the media recently about Muslims observing Ramadan, whether it's Reps. Ilhan Omar and Rashida Tlaibbreaking the fast at the Capitolwith other lawmakers, or Portland Trail Blazers center Enes Kanterfasting through the height of the NBA playoffs. These stories often focus on the challenges and spirituality of fasting. But is there anything deeper about Ramadan that people miss?

If somebody released something during Christmas time or during Hanukkah, they wouldn't necessarily be asked about like, what are important aspects of Christmas or Hanukkah. The way people often ask about Ramadan, it kinda goes to like, Islam 101.

We release this podcast during Ramadan because it's a time of community, and a lot of coverage is being focused on Muslims in that way, where there's this Ramadan 101 going on. But there's also like, "What is a Muslim?"

I think education about what it means to be Muslim and the rituals of being Muslim is one thing, but there's so much to Muslims beyond that. And so many Muslims are not even necessarily fasting during Ramadan, but they are experiencing some form of community that's different. And so I think just allowing them to exist outside of just those rituals and those Orthodox practices that we commonly associate with Muslims, and allowing them to be culturally Muslim and allowing them to tell their stories outside of those boxes.

In thefirst episodeof your podcast, you talk about how there's only a few very specific ways that Muslims are depicted, but there aren't ever really times where they're shown as just normal. They're very much "othered."

Yeah. For example, it's interesting to me that like Rashida Tlaib and Ilhan Omar are these congresswomen who are in positions of power, and they're doing things that are actually very much traditional. Like they're showing Muslims breaking their fast or they're like introducing people to like "Oh, like this is what it means to be a Muslim." But there are also other aspects of Muslim culture that are a little bit deeper toned. There's a lot of Muslim music and Muslim art and I think there is so much more of that that could actually have more impact than educating people on what Ramadan means. No one else is going to fast to try to understand what it means to be Muslim, right? But people can see Muslim art or listen to Muslim music, even if they're not Muslim, and be impacted by it in the same way.

And so if there's something I want from people who are Muslim who are in positions of power, it's to get a little bit more nuanced. Because they are not thinking about the 101 aspect of being Muslim 24/7, so why are we dumbing it down for the general public? I think we actually will have a greater impact if we go a couple layers deeper.

Is there a moment you had while you were recording this show that you find especially powerful or memorable?

The [interview with Deana Haggag, CEO of the arts funding organization United States Artists] literally blew me away. I knew she was going to talk about taking her dad to this DIY Art Space in New Jersey. I had no idea the way that she was going to frame it as this emotional and mental switch where she had been thinking that she was running away from her culture by pursuing the arts, and then she realized that the arts were actually inherently part of everything in her culture.

Like, she says everything down to our religion is in song, everything is dance and the country Egypt is a museum. And by institutionalizing art, she was doing something that was foreign to her parents because art was so much a part of their lives. Listening to her I was like, "Oh my God. That's exactly the struggle that I have had."

And I related so deeply but I had never been able to articulate it in that way. My parents would recite Urdu poetry at the dinner table back and forth to each other, or in the car on a road trip we would listen to Sufi classical music. My dad does Islamic calligraphy in wood and leather as a hobby. These are things that are just deeply a part of my life. Colors and aesthetic and music and how we dress and look — all those things are such a part of who I am.

The show centers Muslim voices, but the stories aren't centered around being Muslim. How do you explain that to your interview subjects so that they understand what you're going for?

We were just like, we don't want to pigeonhole you. We don't want to ask you about that aspect of your identity. We want youto figure out a defining moment.

I think most of the people who ended up being guests on this show, they kind of got it right away, even if it took them a moment to figure out what that moment was in their life. But basically, what we would say is, "Listen, you've probably always been asked about being Muslim and blah blah blah." Some of our queer Muslim guests were like, "Oh my God, thank God you're not asking me about the gay Muslim thing."

You're really trying to move beyond the surface level of people's stories. How do you get that kind of vulnerability out of people?

I think it's a wonder what listening can do. I try to mostly just stay quiet and stay out of the story and the interview process as much as possible....

And when your interviewer is with somebody who's Muslim, who's also been pigeonholed, and who can relate to your experience I think maybe there's a little bit more of a comfort level there. You're willing to go to places where you wouldn't with another interviewer who doesn't know anything about your experience.

I think a lot of times Muslims are called to respond to certain things in the media and they don't have control over their own narrative. And this simple act of not deciding ahead of time what the story is, but rather letting your guests dictate the story, gives them power to define their narrative again and to lead with their story rather than their label. Like you don't have to be a woman or brown or Muslim or all these other things that carry so much baggage and connotation, but instead they can be what it is that they want to be. 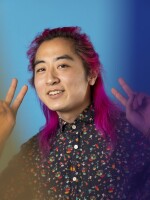 Jess Kung
Jess Kung (they/them) is a production assistant on Code Switch. Previously, they interned with Code Switch and the podcast The Document from KCRW in Santa Monica. They are a graduate of Long Beach State University.
See stories by Jess Kung
Michael Paulino
Donate