In honor of the special connection built on horse racing tradition between Maryland and Kentucky, on today’s episode of  ‘Baltimore’s Future,’ David Warnock will have a special guest for the next three weeks: Jerry Abramson, former Mayor of Louisville, Kentucky and current Lieutenant Governor of the state of Kentucky.

All three parts posted below.

In the first segment, they discuss a partnership between community colleges and businesses that Abramson created, which could be a model for other cities.

In the second segment, Lt. Gov. Abramson talks about merging the City of Louisville and Jefferson County. 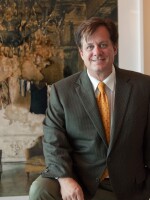 David Warnock
David Warnock is founder and managing partner of Camden Partners, a Baltimore-based private equity firm, and founder and chairman of the Warnock Foundation, whose mission is to cultivate great ideas for the benefit of Baltimore.
See stories by David Warnock