Unsinkable ship that survived Iwo Jima and 'The Perfect Storm' to be sunk off Delaware coast | WYPR
WYPR 88.1FM HD1

A ship that sailed to the beaches of Iwo Jima during World War II and rescued seven people during one of the world’s largest-ever recorded storms will soon sit at the bottom of the Atlantic, a couple dozen miles off the coast of Delaware and Maryland.

“Most people hear the term tug and they think of a little old harbor tug, like Toot. But these were in fact warships. They all carried at least five guns, and some of them even carried depth charges," said Harry Jaeger, of Richmond, Virginia, who served on two of the Zuni’s sister ships during WWII.

The US Navy built 67 of these fleet tugs during the war and named them for various Native American tribes. The Zuni are native to New Mexico.

Four of the ships sunk during WWII and one went down during the Korean War. As for the rest, some are still operating today, nearly 75 years later.

“One of the ships that I sailed on was sold to the Argentinean Navy in 1985 and it’s still operating on a daily basis,” Jaeger said.

The US Coast Guard bought the ship after the war and renamed it the Tamaroa. Because of its sturdy steel frame, it could make rescues in conditions that newer ships couldn’t. 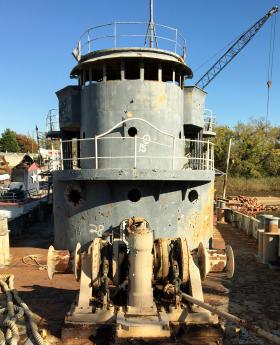 It was there when the Andrea Doria sunk off the coast of Nantucket in 1956. In 1991, it rescued seven people off the coast of New England in a storm later immortalized in Sebastian Junger's 1997 non-fiction book “The Perfect Storm.”

The ship was decommissioned in 1994 and about a decade later it ended up with Jaeger, who was tasked with restoring her. Stepping on that ship, Jaeger said, was like stepping back in time.

“We’d have these older gentlemen come aboard the ship with their canes and they can’t see and they can’t remember where they were yesterday but boy as soon as their feet hit the deck they’re back being 17, 18, 19 years old again. It was absolutely amazing,” he said.

But by 2012, with nearly 85 percent of the restoration complete, Jaeger ran out of money. So he chose the best bad option -- sinking the Zuni-Tamaroa about 26 miles off the coast of Fenwick Island on the Del-Jersey-Land reef. That’s the site of an artificial reef managed jointly by New Jersey, Delaware and Maryland.

Jeff Tinsman is the reef manager for Delaware.

“The natural bottom on that site is completely featureless sand. There’s nothing there to offer feeding opportunities or protection to fish and lobsters or those types of animals,” said Tinsman.

That’s where ships like the Zuni-Tamaroa come into play. The solid steel frame that earned the ship its unsinkable reputation atop the sea makes it well suited for a century beneath it. 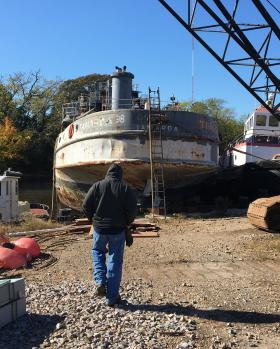 The ship provides a home for invertebrates, and protection for smaller fish. And that inevitably draws larger fish - along with fishermen and divers.

“That benefit goes on forever, that’s not a one-time thing. Every year that vessel will attract fishermen and divers. It will provide a return to the local economy. In this case, the three-state area,” Tinsman said.

Tinsman says that makes more sense than selling a ship for scrap.

And the ecological and economical benefits of using ships this way aren’t just felt on the Atlantic side of the Delmarva Peninsula. Virginia and Maryland also manage dozens of sites in the Chesapeake Bay.

But before any ship can become an artificial reef it has to be stripped off all toxic materials. And that’s where Tim Mullane of Colleen Marine comes into the picture.

Mullane is in Norfolk, Virginia with the Zuni-Tamaroa preparing her for her final voyage. His job is to ensure the ship goes down and nothing but bubbles float up.

“The flooring has been ripped up, the insulation is gone. And we’re basically down to some paint and steel,” Mullane said during a tour of the ship.

And even though he’s stripping her down to the skeleton, he tries to leave as many identifying characteristics as possible because they're a big draw for divers.

“The toilet stays. I guess every diver in the world wants to get a picture of themselves sitting on a toilet on a ship,” he said. 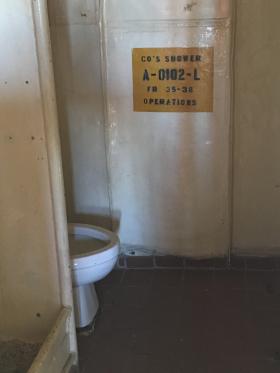 The ship’s four engines are cleaned and left in place. Signs and graffiti from the ship’s many sailors are left on the walls.

Mullane likes to joke that he doesn't know how he's going to sink the ship but he's done this dozens of times before. His method involves cutting holes in a ship and slowly flooding it with seawater.

"It's easier to get them to go down than up," Mullane likes to say.

And there is one more benefit these artificial reefs provide beyond a boost to local ecosystems and economies. For someone like Jaeger, who has an emotional attachment to this piece of history, it’s a better send off than selling it for scrap metal.

“You can always say, 'well, she was sunk for a good reason. Somebody will be able to go out there and look at her.' It’s a good ending,” Jaeger said.

The Zuni-Tamaroa is expected to be sunk on the Del-Jersey-Land reef sometime this year.

Chesapeake: A Journalism Collaborative is funded with grant support from the Clayton Baker Trust, The Bancroft Foundation, Michael and Ann Hankin, The Jim and Patty Rouse Foundation, The Rob and Elizabeth Tyler Foundation, and the Mid-Shore Community Foundation.

Crisfield, on Maryland’s lower Eastern Shore, is probably best known for the annual J. Millard Tawes Crab and Clam Bake, a political schmooze fest of legendary proportions. But the town soon will have another claim to fame. It’s about to be the first municipality in the Delmarva region powered by a windmill.

Searching for ghost pots in the Chesapeake

Every year, Chesapeake Bay watermen toss about 600,000 pots overboard to catch one of our favorite delicacies – the blue crab. But inevitably, some of those crab pots disappear. They become "ghost pots," killing millions of crabs and other marine species trapped inside.