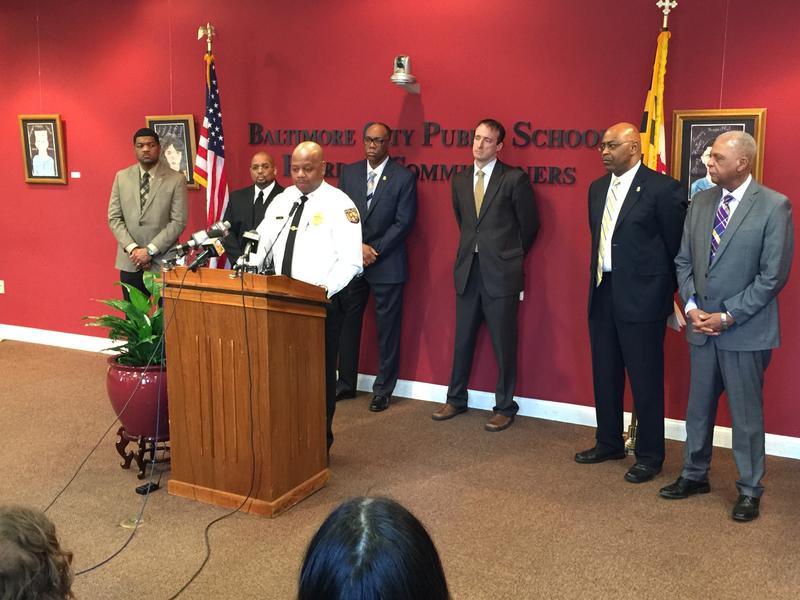 Two Baltimore City School Police officers have been charged with second-degree assault and misconduct in office after cellphone video surfaced showing one of them slapping and kicking a teen at a school while a second officer stood by.

The officers are Anthony Spence, 44, and 53-year-old Saverna Bias. Spence is also charged with second-degree child abuse, a felony.

Acting Baltimore School Police Chief Akil Hamm announced at a news conference Wednesday that Spence is now on administrative leave without pay because of the felony charge.

Bias, whose charges are misdemeanors, is on leave with pay.

In a statement of charges, police allege that a witness said Bias told Spence, "You need to smack him because he's got too much mouth." Spence then hit and kicked the teen.  Police said Spence was not trying to arrest the teen and wasn't acting in reasonable self-defense.  The teen was later identified as a 16-year-old who is a student at the school.

School Police Chief Marshall Goodwin was also placed on, but Schools CEO Gregory Thornton declined to say why at the news conference, calling it a personnel matter.

Thornton said the incident "pierced the trust that existed in that school."

Court records show both officers have been accused of violent behavior before.

In 2011, another school police officer filed for a protective order against Spence. The officer, a woman, said Spence, who was on duty at the time, grabbed her while she was in her car, struck her in the face, and prevented her from leaving.

The protective order was later dismissed at the female officer's request.

Other court records show that Bias was charged with second-degree assault and carrying a dangerous weapon with intent to injure in April 2011. Police said then that Bias threw a bottle of alcohol at a man she was breaking up with. The bottle missed, the man refused to press charges, and the case was shelved.

Spence and Bias turned themselves in Tuesday night and have since been released on bond.

The school district has its own police force separate from city police.