Sports At Large: Will The Orioles Pay "Crush" Davis The Big Bucks? 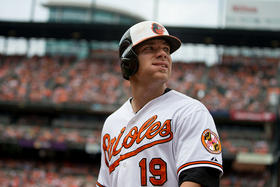 When Orioles fans recall the great moments of the 2015 season, at least they'll have the weekend.  The Birds swept a three-game series, keeping the hated Yankees from clinching home field for Tuesday's wild card game.  But even those fleeting moments of glory couldn't lessen the pain of knowing that, unlike last season or the 2012 season, the Orioles would not be playing past Sunday.  And unlike the last three campaigns, 2015 will end with the Orioles failing to garner a winning record.

It wasn't supposed to be this way. The Birds dominated the American League East in 2014, and even with a sweep by Kansas City in the league championship series, the future looked promising, as of last October. 2015, however, never got off the ground, or at least not the way Orioles fans hoped for, or even expected. The disappointment began in the offseason, when the club failed to resign longtime outfielder Nick Markakis and 2014 sensation Nelson Cruz. The Orioles’ offense never made up for their absence, and indeed, Cruz's new team, the Seattle Mariners tossed a no-hitter at the Birds in August.

And speaking of no-hitters, Jake Arrieta, whom the Orioles gave up in a trade to the Cubs two years ago, threw a no-no at the Dodgers in September, one of a major-league leading 22 wins.  Arrieta would have looked nice near the top of a starting rotation that struggled all year.  But even with all the pitching and hitting problems, the Orioles still had a chance to contend in a shaky AL East.

That is, until a disastrous two-week run in mid to late August, where they dropped nine of 11, to essentially fall out of the race for both the division and the wild card.  The 2015 season wasn’t a complete washout.  First baseman Chris Davis, who led baseball in home runs in 2013, rebounded from a lousy 2014 to again lead all of baseball in homers with 47, two of them in Sunday's finale.  Third baseman Manny Machado smashed 35 homers – more than Eddie Murray or Cal Ripken ever did in any single season.  Machado may end up in the same hallowed ground as Ripken and Murray, as a legend of the franchise.  But that's down the road.

In the short term, the future is murky, at best, for the Orioles.  While Machado is tied to the team for the foreseeable future, Davis is a free agent.  His price tag is likely to approach, if not, exceed $150 million over six years.  The Orioles have shown little inclination to pay the going rate for superstars in recent years, meaning the popular Davis is likely gone.  In addition to Davis, catcher Matt Wieters and pitcher Wei-Yin Chen are also free agents.  All three are clients of super agent Scott Boras, who has never settled for less than top dollar.  Even if Chen stays, the club will also need to get another quality starting pitcher, as the Orioles were the only team in baseball not to get a complete game from a starter.  Add it all up, and it looks like this weekend's thrill might be the brightest moment around these parts for a while. And that’s how I see it for this week.

You can reach us via e-mail with your questions and comments at Sports at Large at gmail.com. And follow me on Twitter at Sports at Large.  Until next week, for all of us here and for producer Mary Rose Madden, I’m Milton Kent.  Thanks for listening and enjoy the games.

Sports At Large: Sportswoman Of The Year Vs. The Swimsuit Issue

We’re just past Labor Day and with its passing comes the unofficial end of the summer.

And the end of this summer marks the end of arguably the most visible year for women in sports in decades, if not ever.

Sports At Large: Listen Up While Vin Scully Is Still Calling The Games

For any number of reasons, baseball remains the one sport where comparisons between players of different generations can’t be dismissed out of hand.

The one thing about baseball that has not changed for the better over the years is in the quality of announcers. The men who call the game today simply aren’t as good as their predecessors.