Sports At Large: Will The NFL Remember Junior Seau's Story In Its Entirety? 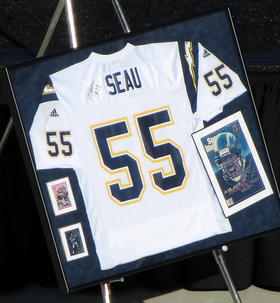 As teams begin to report to training camp this week, I continue to find myself in a bit of a quandary over how a sport whose leadership shows such a continued indifference over how the public perceives it much less how it treats its players can still thrive.

There are signs, in the post Ray Rice era, that the league is getting it, but the message still hasn’t entirely gotten through, witness Dallas Cowboys defensive lineman Greg Hardy.

Hardy was convicted by a North Carolina judge of savagely beating a woman, then got essentially a year off with pay last year. He was scheduled to get a 10 game suspension this year, but the punishment was recently reduced to four games.

Just as troubling is how the NFL is dealing with the ongoing matter of head trauma to its players. While the league is doing slightly better at minimizing the risks encountered by current players, it continues to bury its head in the corporate sand when it comes to former players.

The latest example comes with former San Diego linebacker Junior Seau, who will be inducted into the Pro Football Hall of Fame in nearly two weeks.

Seau made nearly 2,000 tackles in his 20-year career and the 268 games he played in is surpassed by only 10 non-kickers in the history of the league.

Seau’s penchant for playing the game at full speed and with no apologies was right out of NFL Films.

However, his 2012 death from a self-inflicted gunshot to the heart, was a page out of the league’s nightmares, as it opened questions about whether Seau’s headlong play opened him up to head trauma.

Those questions were answered the following year, when Seau’s family revealed that he had suffered chronic traumatic encephalopathy, a neurodegenerative disease that can lead to, among other things, dementia.

You can’t help but wonder, however, how interested the NFL is in having the offspring of one of its greats stand at her father’s greatest professional moment and perhaps ponder if the game he loved didn’t contribute to his premature death at age 43.

So, when the 2015 season begins, celebrate the joy that football brings, but take a moment to remember men like Junior Seau, men the NFL would rather you forgot.

Sports At Large: Do Americans Care About FIFA?

Know how you hear about the launch of a new product or the opening of a big summer blockbuster movie…and your reaction is a big yawn.

That’s largely the feeling from this corner over last week’s news that executives of soccer’s international governing body were arrested on corruption charges.

I guess I’m supposed to be upset or at least concerned that 14 FIFA officials were indicted on charges of bribery, money-laundering and racketeering involving tens of millions of dollars over the past two decades.

Sports At Large: The O's And The Baltimore Unrest

Listen
Listening...
/
Sports At Large: The Orioles Are In

For the last seven decades, it’s been baseball, more than our other major sports, that has led the way in terms of its connection to the broader American social fabric. And nowhere was that association on greater display than last week during the unrest that rocked Baltimore to its core.