Sports At Large: Sportswoman Of The Year Vs. The Swimsuit Issue | WYPR
WYPR 88.1FM HD1

Sports At Large: Sportswoman Of The Year Vs. The Swimsuit Issue

ShareTweetEmail
Listen
Listening...
/
Sports At Large: Sportswoman Of The Year Vs. The Swimsuit Issue 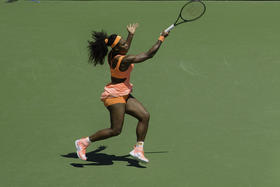 We’re just past Labor Day and with its passing comes the unofficial end of the summer.

And the end of this summer marks the end of arguably the most visible year for women in sports in decades, if not ever.

But it’s been in the last few months where it seems the broader culture – and by that we mean, men – really not only paid attention to what women were doing athletically, but also began to respect their accomplishments in the sporting realm.

The summer began with the dominance of the United States team in the women’s World Cup soccer tournament.

From there, Elena Delle Donne of the WNBA’s Chicago Sky posted a career-high 45 points in a bravura performance as a member of the longest-running professional women’s sports league in the U.S., at 18 years and counting.

Speaking of basketball, former WNBA player Becky Hammon attracted wide notice as she completed her first season as an assistant coach with the San Antonio Spurs of the NBA.

Hammon, the first woman to serve in a full-time role as an assistant coach in a men’s professional league, gained further distinction when she guided the Spurs’ summer league team to a championship in the league’s tournament.

The NFL, whose track record with women has been shaky in recent seasons, was quick to call Welter the first female assistant in league history.

That’s a stretch, but Welter’s presence in Arizona does represent a tiny crack in the gridiron ceiling.

Meanwhile, veteran announcer Beth Mowins was tapped to call Oakland Raiders exhibition games on television, making her the first woman to do play-by-play of an NFL game in nearly 30 years.

Also, the world took notice of Ronda Rowsey, the mixed martial artist fighter whose bouts rarely lasted longer than a minute. No less than Sports Illustrated hailed her as the most dominant athlete in the world, months after featuring her in the swimsuit issue.

But mostly, this was the summer of Serena Williams, who held the tennis world and the sports world in general in thrall, winning the Australian Open in the winter, then the French Open in late May.

After she captured Wimbledon in July, the focus immediately turned to the U.S. Open in New York. If she could make it there, Williams would become the first person, male or female, to hold all four major titles in the same calendar year, a Grand Slam, in 27 years.

Williams won 26 Grand Slam matches this year, including twice against her sister, Venus, all at the tennis ancient age of 33. But she failed in the 27th match, last Friday’s semifinal against unranked Roberta Vinci of Italy.

Serena Williams may hit the cover of Sports Illustrated as the sportswoman of the year, the question is, will it sell more than the swimsuit issue?