Sports At Large: The O's And The Baltimore Unrest | WYPR
WYPR 88.1FM HD1

Sports At Large: The O's And The Baltimore Unrest

ShareTweetEmail
Listen
Listening...
/
Sports At Large: The Orioles Are In 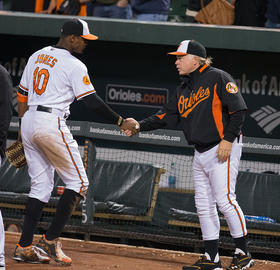 For the last seven decades, it’s been baseball, more than our other major sports, that has led the way in terms of its connection to the broader American social fabric. And nowhere was that association on greater display than last week during the unrest that rocked Baltimore to its core.

Following Wednesday’s surreal game with the Chicago White Sox, the first in Major League Baseball history to be played without fans, Orioles manager Buck Showalter was asked if he had any advice for young black people in the city. Showalter paused a moment, then did something that frankly a lot more people should do on a lot more subjects. Showalter, who grew up the son of a white Florida high school principal, said he didn’t know what to say. Showalter said, "I’ve never been black, OK? So I don’t know. I can’t put myself there. I’ve never faced the challenges they face, so I understand the emotion, but I can’t."

During a week when a nation which has largely shown its indifference to the plight of the inner city in general and Baltimore specifically suddenly became experts on what to do next, Showalter’s bluntness and honesty were refreshing. Showalter went on to say that he wanted his team to be a rallying force for the city and not just because they’re playing good baseball.

Indeed, centerfielder Adam Jones, a rarity in the game these days, as an African-American star, has spoken poignantly on racial matters historically and recently and seems to cherish serving as a role model for Black youth. Jones and Showalter could potentially be important contributors in the needed dialogue on the way forward for this city. However, as valuable as the manager and star player are, perhaps the most important words recently came from a most unlikely place.

If you were expecting John Angelos, the Orioles’ chief operating officer and the son of the team’s principal owner, to condemn the protestors who approached Oriole Park two days before the riots, you were wrong.

To the contrary, Angelos, responding to a Tweet from a local talk sports talk show host who criticized the demonstrations, seized upon what he called the American political elite that had, in his opinion, laid the foundation for the protests. In Angelos’ view, the relocation of middle class jobs from this country to Third World nations and dictatorships had, quote, plunged tens of millions of good, hard-working Americans into economic devastation unquote. Angelos criticized what he believes to be an increasing militarized and surveilling government that abuses the Bill of Rights. The tweets read more like the manifesto of a left winger trapped in a 60’s vortex, not the Duke-educated scion of a wealthy family. But Peter Angelos has been a consistent contributor to Democratic candidates and it appears that the apple hasn’t fallen far from the tree.

It will be deeds, not words, that get this city through this crisis, but the words of John Angelos and Buck Showalter are important, if not unlikely underpinnings for what should come next.