Sports At Large: Listen Up While Vin Scully Is Still Calling The Games

ShareTweetEmail
Listen
Listening...
/
Sports At Large: Listen Up While Vin Scully Is Still Calling The Games 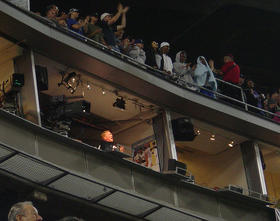 For any number of reasons, baseball remains the one sport where comparisons between players of different generations can’t be dismissed out of hand.

The one thing about baseball that has not changed for the better over the years is in the quality of announcers. The men who call the game today simply aren’t as good as their predecessors.

To be fair, the modern-day play-by-play man has an impossible standard to match. With names like Mel Allen, Red Barber, Jack Buck and Ernie Harwell as trailblazers, the baseball radio booth has been hallowed ground indeed.

Here in Baltimore, we’ve been blessed by the presence of two legends. In my childhood, there was Chuck Thompson, who was on hand for every great moment in Orioles and Colts history.

His catchphrases, “Go to War, Miss Agnes,” and “Ain’t the beer cold” punctuated crab feasts and picnics up and down the Chesapeake Bay for decades.

And then there was Jon Miller. In 13 years before he was inexplicably run out of town by owner Peter Angelos, Miller adeptly acknowledged baseball’s great history while bringing a hip, modern sensibility, kind of like Bob Costas, without the self-importance.

We are on the verge of losing one of Miller’s idols, Vin Scully, acknowledged by many as the greatest baseball announcer ever.

Scully, who will be 88 in late November, has decided that next season, his 68th, will be his last behind the microphone, calling Los Angeles Dodgers games.

Scully has borne witness to some of the great moments and figures in sports history. He was there when Sandy Koufax was a wild Dodger farmhand in Brooklyn before he rounded into arguably the greatest left-handed pitcher in the game.

Scully was there in Atlanta on the April night 41 years ago when Hank Aaron smacked a drive to the left-field bullpen and surpassed Babe Ruth as the greatest home run hitter ever.

Scully saw Stan Musial, Jackie Robinson, Willie Mays, Ernie Banks and a million guys since. And he, like his great contemporaries, wove their personal stories within the narrative of the game you were listening to.

So, Don Drysdale wasn’t just a terrific pitcher, but someone who knew and could even empathize with. Maury Wills wasn’t just a great basestealer, but a guy who could steal your heart.

Sure, that sounds quaint and hokey, given today’s cynicism, but, in the 60’s and 70’s, announcers like Chuck Thompson and Vin Scully were responsible for nothing less than making heroes.

In fairness to the modern baseball announcer, the fact that current players hardly measure up in talent or persona to the greats of yesteryear means the guy in the booth doesn’t get much of a chance to create mythology.

Add that to the huckster element in virtually every game telecast where everything is sponsored, from the lineups to the call to the bullpen to the temperature, and it gets hard to tell a story that has any meaning.

But, if you have a satellite radio, give a listen to how Vin Scully still makes baseball relevant and meaningful, but listen quickly, because when he goes, we’ll not soon hear his ranks again.

Sports At Large: Does The NFL Celebrate Labor Day?

The labor union has taken a tremendous beating over the last 30 or so years, and nowhere is that more obvious than in the sporting realm.

By comparison to the baseball union, which has historically been strong, the NFL Players Association has seemed ineffective and weak.

Sports At Large: College Football Has An Image To Protect?

It’s late August already, and while attention among sports fans in much of the country has turned toward the impending NFL season, there are almost as many who eagerly await the start of college football. One of those places is in Waco, Texas, where the Baylor faithful hope this will be the season their Bears lead them to the promised land of a national championship.

Sports At Large: Will The NFL Remember Junior Seau's Story In Its Entirety?

As teams begin to report to training camp this week, I continue to find myself in a bit of a quandary over how a sport whose leadership shows such a continued indifference over how the public perceives it much less how it treats its players can still thrive.