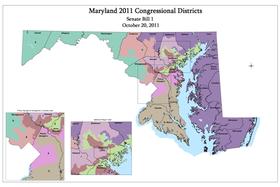 Governor Larry Hogan recently formed a commission to study Maryland's redistricting process and make recommendations on how to reform it. The panel held its first hearing last night at Towson University -- an institution that straddles two different Congressional districts. WYPR's John Lee talks with Nathan Sterner about what the panel discussed, the process for proposing a reform plan, and the prospects of such a plan in the General Assembly.