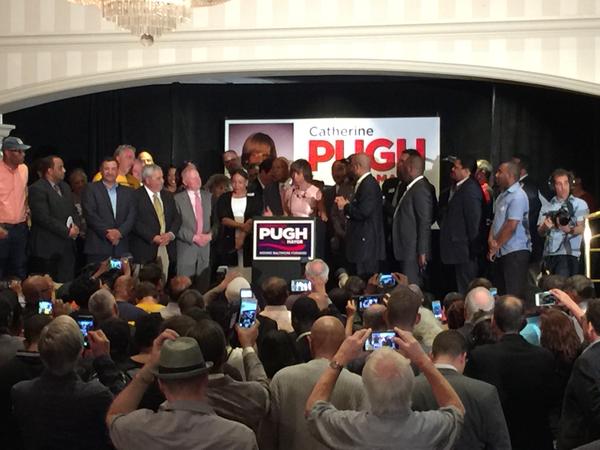 State Senator Catherine Pugh claimed victory last night in a tightly contested Democratic mayoral primary that became tighter as the evening went on, then focused on unity and moving forward in her victory speech.

She thanked Baltimore and she thanked her supporters, her volunteers and the politicians who endorsed her. And she said everything she has done—from serving on the city council to being the majority leader in the Maryland State Senate—“has prepared me for this moment to lead this city in the direction that it should go.”

She said that while it’s important to have a thriving downtown, neighborhoods that have been left behind are important too. That’s why “we’ve done some great things in some of our communities and neighborhoods,” she said.

“But I’m telling you together, we’re going to build great neighborhoods throughout this city."

After her speech, Pugh – who came in second in a race for mayor against Stephanie Rawlings-Blake five years ago--said to come in on top was a dream come true. She said her administration would be one of inclusion.

“From our young people to our seniors; I’ve walked; I’ve been across the depths and the breadths of this city,” she said. “And I hear. I hear the voices of the people who say ‘bring us together lead us in the direction that this city should go in’ and the mayor will set the tone and I will set the tone and the vision for moving our city forward.”

Social activist Kwame Rose voted for Pugh; joining her at a polling place in Southwest Baltimore. He insisted, however, that he didn’t pick her, she picked him.

“She saw something in me and she always begged me to stay safe and to do the right thing,” he said. “And because of her advice I’ve been able to advance in this last year and become a better person and a better human being.”

Former Congressman and NAACP President Kweisi Mfume praised Pugh’s commitment and her knack for bringing communities together.” And he said he would “urge the other candidates in the race to coalesce behind her.”

Mfume said the only way to have one Baltimore is to have “one movement toward that; black, white, Latino; no matter where you are across this city, it’s time to move forward and we have a new champion and a new leader to move us forward.”

Among those in the crowd to congratulate Pugh was Baltimore Police Commissioner Kevin Davis; who credited her for running a dignified campaign.

“And I think when people look back at the way she conducted herself in this campaign season, in spite of some negativity that was thrown her way, she always chose – and it’s a choice – she always chose to rise above it all.,” he said.

Pugh will face off against former WBAL Radio newsman Alan Walden, who handily won the Republican nomination, and several independent candidates. But because the number of registered Democrats in the city vastly outnumbers Republicans, she’s likely to be the next mayor of Baltimore.