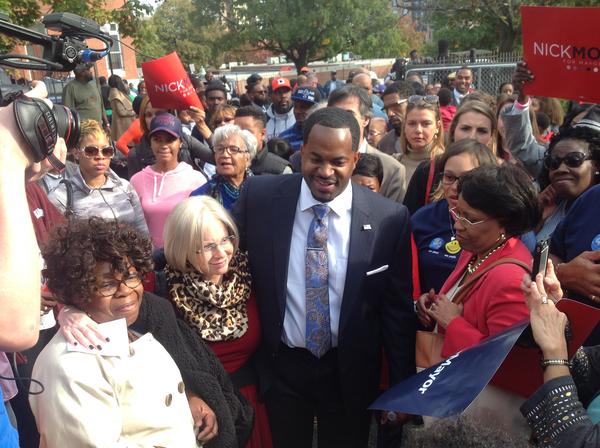 Baltimore City Councilman Nick Mosby announced Sunday his intention to run for mayor in 2016, citing a need for new ideas for the city.

He was joined by his wife, State’s Attorney Marilyn Mosby, and their two young daughters at the announcement hear their home in Reservoir Hill.

He promised a more transparent, accountable city government, a simpler process to deal with vacant properties and to equip all police patrol officers with body cameras immediately.

“We’re not going to get caught up in the talk; body cameras are good for the police, but they’re also good for the citizens,” he said.

A body camera pilot program is scheduled to begin Monday and end on Dec. 26.  Mayor Stephanie Rawlings-Blake vetoed a council-backed camera proposal last year because she said the council’s bill was not thoroughly thought out.

“I’m disgusted driving through my own district seeing some of the blight and the decline we’ve seen over several decades,” Mosby said.  “When is enough, enough?”

The first-term councilman grew up in Northeast Baltimore and graduated from Baltimore Polytechnic Institute and Tuskegee University.  Mosby worked as an engineer for Verizon and BGE before devoting himself as a full-time councilman to his West Baltimore district.

Mosby joins former Mayor Sheila Dixon, state Senate Majority Leader Catherine Pugh and his City Council colleague Carl Stokes as the fourth Democrat to announce a campaign to succeed current Mayor Rawlings-Blake who is not running for re-election.  Councilman Brandon Scott is rumored to be joining the race as well.

Neither Dixon, Pugh, Stokes nor Mosby has officially filed to run.

The filing deadline is February 3 for the April primary, which has been the de-facto mayoral election because registered Democrats vastly outnumber Republicans in the city.