Mayor’s Race: Where is Freddie Gray? 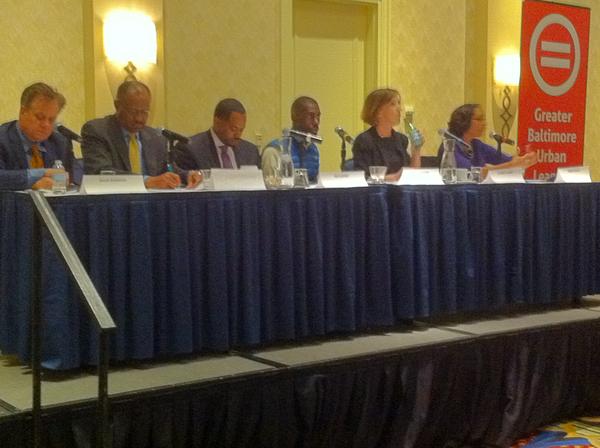 Baltimore is marking the death one year ago of Freddie Gray at the same time it’s choosing a mayor. But Gray, his death while in police custody and the riots that followed have not been center stage in the campaign.

It’s not that his name hasn’t come up at all. Businessman David Warnock said it at a recent mayoral forum sponsored by the Ur-ban League.

“The legacy of Freddie Gray, if nothing else, is that we are in this all together,” he said.

The worst of the rioting took place in Councilman Nick Mosby’s district. But Mosby, who dropped out of the mayor’s race, last week, says the questions candidates have been asked focused on the aftermath.

“More like what has been done after the unrest,” Mosby says. “How the unrest could have been potentially prevented. What are we doing to ensure that it won’t occur again?”

But considering the magnitude of what happened after Gray’s death--tens of millions of dollars in damage from torched build-ings, rioting and looting; events that plunged Baltimore City into the national discussion of Black Lives Matter, and the systemic issues of poverty--you might think Freddie Gray would have been in the spotlight in this mayoral race.

Jamal Bryant, the pastor at Empowerment Temple Church, says he wants to hear what the candidates would have done if Freddie Gray had happened on their watch.

“They would have gone out into the street and given some re-dress, not give an address from downtown city hall, and talk about an open 90 day plan,” he says.

John Willis, a political science professor at the University of Baltimore,  says Freddie Gray is an emotional topic. So in a hotly contested mayor’s race, candidates may decide to steer clear of it.

“Someone could be offended by your perception of the incident and therefore caution comes in,” he says.

Also, the mayor isn’t on the ballot. City Councilman Bill Henry, who isn’t running for mayor either, says if Stephanie Rawlings Blake were vying for reelection, you would be hearing a lot more about what happened April a year ago.

“There’s no point in it, I guess in terms of differentiating them from each other because none of them were in charge when it happened,” Henry says. “And so all of them are going to say that it was awful and we should make sure it doesn’t happen again.”

Mileah Kromer, who runs the Goucher poll, says the candidates may not be bringing up Freddie Gray’s name much, but they are digging into what led to his death.

“I think what the candidates have done is take us a step back from the event itself and the unrest itself to really try to address the systemic problems that actually caused the death of Freddie Gray,” Kromer says.

State Senator Catherine Pugh, the front runner in the Democratic mayoral primary, says Freddie Gray is a symbol of those systemic problems and public officials need to “look inside of our communities to see where our shortcomings are and how we need to go about the business of fixing them.”

Freddie Gray also didn’t come up at a recent City Council forum in the seventh district, Mosby’s district, ground zero for the rioting. Mosby says people in the neighborhoods tell him nothing has changed in their day-to-day lives and that the long wait for change creates apathy and lost hope.

“It’s now time more than ever that we come together and develop the policies and programs that will forever change the outcomes in communities like in West Baltimore,” Mosby says.

But it may be a while before that change comes. While the primary is just days away, the general election isn’t till November and the new mayor will not be sworn in until December.