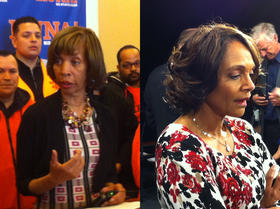 Sheila Dixon says when she was mayor she made city agencies more accountable to the taxpayers. If you called City Hall with a problem, you deserved an answer. She says she’ll bring that back if she’s elected.

For instance, Dixon says, she was driving to a church on the east side on Sunday and saw trash everywhere. She says that is unacceptable.

“You have to know the problem areas,” Dixon says, “where there are people who either dump or don’t put their trash out on certain days. My folks would have been out there.”

Because she’s been mayor before, as well as a member of the council and City Council President, Dixon says she is the only candidate with the experience to start the job on day one, compared to state Senator Catherine Pugh, who served just one term on city council.

But Pugh counters she brings a wide range of experience to the race, including in the state legislature and in private business. She is on good terms with the governor and President Obama.

Pugh seems most proud about the public school she helped to start in 2011, the Baltimore Design School. It’s located in Station North. Pugh says it focuses on fashion, architecture and design, and in being a community school.

“It’s a school that’s used often times during the weekend and after school,” she says, “not just for after school programs but for community meetings and events. So it is the kind of concept that I think would bode well across the city.”

A recent poll puts Dixon and Pugh in a neck-and-neck tie in the race for Mayor.

Pugh and Dixon have different top priorities if elected. Pugh says jobs will be job one for her.

She’s proposing taking jobs to the people via seven buses, each one loaded with a data base containing all available jobs in the city, as well as three career counselors. She would dispatch the buses to neighborhoods with the highest unemployment rates, some as high as 30 percent. Pugh says each bus would have a goal of finding jobs for ten people each day.

“These people are so preoccupied with just trying to live every day,” Pugh says. “It’s hard for them to go out and actually try to find something better. Or even find a job or even know where to go to.”

Dixon says she also will find jobs for people. She’ll do it by tripling the money spent on job training, and taking a good look at all of the training programs in the city to see what is working. But she says her top priority as mayor would be keeping people safe.

She points out that crime rates dropped during her previous term as mayor. Dixon says she will target violent criminals, hire more police officers, train them better and bring back foot patrols. And, she says, it’s not just about homicides. Her home was recently burglarized.

“The police officer came to the house said burglaries wasn’t a priority,” Dixon recounted. “I said quality of life is a priority. That’s why people leave.”

Like all 13 Democrats in the race, Dixon and Pugh say they’ll pay for additional police and job training programs by rooting out waste, fraud and abuse in existing city programs. But they disagree on what to do about vacant homes.

Pugh wants to bring back the dollar house program, where you buy a vacant house for a dollar with a pledge to fix it up. Dixon says that program is no longer viable because the federal subsidies that made it work are long gone. She proposes instead that the city make vacants cheaper and easier to buy by getting rid of tax liens on the properties.

Dixon also proposes raising the smoking age in Baltimore to 21.

Mayor’s Race: Dixon and Pugh have Squared Off Before

Listen
Listening...
/
Mayor’s Race: Dixon and Pugh have Squared Off Before

The two leaders in the race to be Baltimore’s next mayor are no strangers to each other. In fact, they have battled each other before for public office.

One of the candidates for Baltimore mayor wants the city to help students afford a college education. Activist and educator DeRay Mckesson is proposing the city create college savings accounts for every child in its school system.

Arts in the mayor's race

The candidates to be Baltimore's next mayor laid out their plans to support the arts Monday night at a forum at the Maryland Institute College of Art. Event organizers said it was the first mayoral forum ever dedicated specifically to the arts.  WYPR's John Lee was there and joined Morning Edition host Nathan Sterner to talk about it.