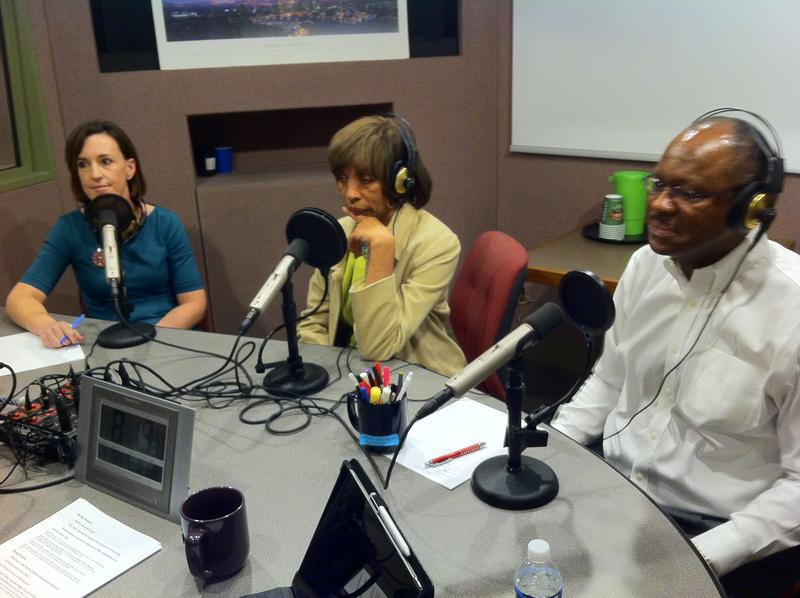 Hours before Councilman Nick Mosby shook up the race for mayor by dropping out, the frontrunner pulled a surprise of her own.

State Senator Catherine Pugh had begged off from a debate Wednesday on WYPR’s Maryland Morning with fellow candidates Elizabeth Embry and Councilman Carl Stokes, citing a scheduling conflict. Then about 15 minutes into the program Pugh showed up, surprising the candidates and host Tom Hall.

But soon after Pugh arrived, Embry began to question her ethics, judgment and management.

Embry zeroed in on Pugh for soliciting money from lobbyists during the legislative session and exploiting a loophole in campaign finance laws.

It would be illegal for Pugh to take money from lobbyists during the session if she were running for re-election to the senate, Embry said. But she’s allowed to collect cash to run for another office, like mayor.

“You’ve said it’s appropriate and ethical, I obviously respectfully disagree,” Embry said. “I don’t think it’s appropriate to hold fundraisers from lobbyists who are trying to get bills passed.”

But Pugh defended her record, saying she’s held political office for 15 years and her ethics have never come into question.

“Before I ever even take donations from anyone,” Pugh said, “the first thing I do is sit down with the ethics board and ask the question, ‘what are we allowed to do and what are we not allowed to do.’ And the laws were explained to me very clearly.”

The candidates were asked what would be their guiding philosophical approach to the city budget. In other words, where will you spend money? Councilman Stokes said it would be on the city’s most vulnerable, and he took the opportunity to take a swipe at Mayor Stephanie Rawlings-Blake’s record.

“The mayor has never had a problem finding money for wealthy people who want a tax break,” Stokes said. “Never. In communities across the city. In schools, in young people, in seniors, she’s always had it difficult to find the money to take care of those issues.”

On the same question of where to spend money in a strapped city budget, Pugh said schools and police, but she also said as mayor she would take a look at how many people work for the city.

“And I think it’s important for the next mayor to be transparent about the budget but to scrub the budget and look at how you are deploying your resources,” Pugh said.

On this point of finding waste in the city budget, the three candidates are in agreement. Embry said a classic example is the police overtime budget, “which is $49 million,” Embry said.

“And that’s really about management. It’s about not being able to fill our recruitment classes. Not being able to fully staff shifts. We get in this cycle where we are spending more money to do things poorly instead of getting ahead of the problem and spending money to make a difference.”

A recent poll indicated the race for mayor is a two-person contest between Pugh and Former Mayor Sheila Dixon. But as you might expect, neither Embry nor Stokes sees it that way. Embry, who came in a distant third in that poll, says she has momentum and that there are still a lot of undecided voters. Stokes says Pugh’s support is squishy and minds can be changed.

Last week, Maryland Morning had the other three major candidates for the Democratic nomination on the show: Dixon, businessman David Warnock and Councilman Nick Mosby, who then was still in the race;