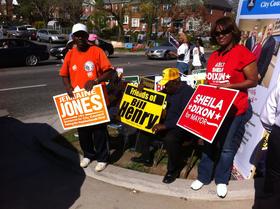 All of the major Democratic candidates running for mayor say they support the idea of raising the minimum wage. But none of them fully support a proposal introduced this week in the City Council that would do just that.

The candidates agree with what Councilwoman Mary Pat Clarke wants to do, but they part ways with her and each other on how you go about it.

Councilman Carl Stokes comes the closest to backing Clarke’s legislation. He is a co-sponsor and says he “supports the bill.” But then he qualifies his support, saying it would be too much of a burden on city businesses if you increase the minimum wage without also lowering their taxes.

Stokes says the city “can’t have the highest minimum wage and the highest by far, by far, property taxes and other fees.”

Sheila Dixon has been campaigning for a $15 an hour minimum wage, but only for city employees.

“I want to start first of all with city government to show how it can be done effectively in a way that’s not going to hinder or affect our budget,” she says.

Attorney Elizabeth Embry says that’s the better way to go, raising the minimum wage over time to $15 across the state. Embry says that way employers won’t choose one jurisdiction over another when deciding where to do business, based on the required minimum wage.

But as mayor would Embry back a $15 an hour minimum wage in just Baltimore, if the state does not take action? Maybe.

“I would sign it in the absence of traction at the state level,” Embry says. “But I would prefer to work with my city council colleagues and work with our state delegation to push for a statewide minimum wage.”

Meantime, one mayoral candidate, businessman David Warnock, was campaigning in the flesh at one of the early voting sites, The League, on Cold Spring Lane, as voters drove thought a gauntlet of sign wavers shouting out their support for this or that candidate. When it comes to Clarke’s plan, Warnock says he hasn’t seen the details, so he wants to study it.

“We aren’t the first city to be looking at increasing the minimum wage to $15 an hour, where surrounding counties and surrounding municipalities haven’t,” he says. “And I’d be really interested to see what happens to retail franchises when you do that kind of thing.”

Seattle and San Francisco are two cities that have done that kind of thing.

Warnock says it’s important to create jobs that will pay a living wage. And State Senator Catherine Pugh, echoing Warnock, says she hasn't seen Clarke’s proposal either, and that the city needs to invest in job training.

“We want to increase people’s opportunities to have real work,” Pugh says. “Real opportunities for employment. Not just minimum wage jobs but jobs that will lead to careers and future.”

For her part, Councilwoman Clarke says she’s not surprised none of the mayoral candidates are jumping on board. They’re all “about a week away from standing for election and they don’t want to be on one side or the other on such a major issue,” she says.

Clarke is optimistic her legislation can pass this year. But if not, she says she’ll bring it back again next year. And if that happens, the new mayor will have to take a stand.