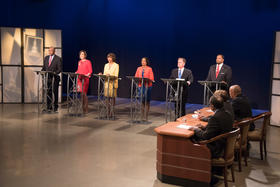 The six major Democratic candidates for Mayor squared off last night in the final televised debate before the April 26 primary. However, the rules of the debate kept the candidates from questioning each other, which allowed the frontrunner to escape virtually unscathed.

The only give and take came late in the game, when attorney Elizabeth Embry questioned State Senator Catherine Pugh’s ethics, because she raised money from lobbyists who have testified before her senate committee.

Pugh, frontrunner according to a recent poll, shot back, pinning Embry’s attack on her distant third place finish in that same poll.

Beyond that exchange, the candidates were allowed to hit their favorite talking points from the campaign. There was general agreement that crime and schools are top priorities for the next mayor.

Former Mayor Sheila Dixon said crime went down when she was in office. If elected again, Dixon says you would see police throughout the city. “We can continue to build on the strengths of what I did under my administration,” Dixon said. “We had our police officers out in communities and neighborhoods engaged.”

Dixon and first term Councilman Nick Mosby both said police must target the most violent offenders. But Mosby also argued that the Mayor’s office needs new blood, and he’s the guy. “Well if we keep doing the same things over and over again with the same cast of character, we’re going to get the same exact results,” Mosby said.

Embry said as mayor she would follow Seattle’s lead and end the war on drugs. “We are not arresting people for possession,” Embry said. “In fact we are putting them directly into the public health sector directly into treatment. And that has saved the city money because it lowers recidivism, it helps communities more than arresting people and have them cycle through the system.”

The candidates talked about the importance of improving the city’s schools.

Councilman Carl Stokes said within two years of being elected, he would rip out the lead pipes in Baltimore’s city schools, so children could safely drink from water fountains.

Pugh said she would push for more vocational education in city high schools so graduates have other options besides college, by learning trades like plumbing and construction.

“Even if they enter into these careers, it also allows them the opportunity to begin to build their own businesses and if they should decide later to go to college, that is an option as well,” Pugh said.