Mayor’s Race: Dixon and Pugh have Squared Off Before 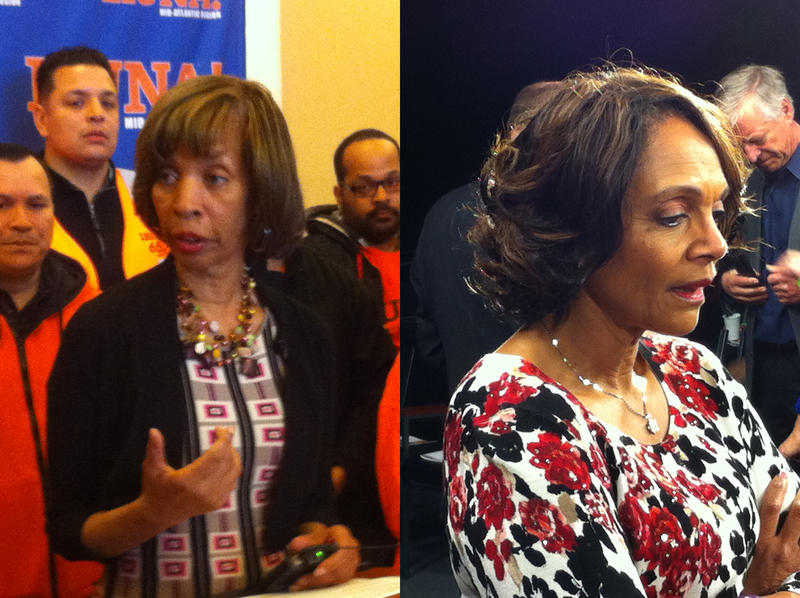 Listen
Listening...
/
Mayor’s Race: Dixon and Pugh have Squared Off Before

The two leaders in the race to be Baltimore’s next mayor are no strangers to each other. In fact, they have battled each other before for public office.

In 2003 Sheila Dixon was finishing her first term as the President of the Baltimore City Council and planned to run again. Catherine Pugh was a first-term member of the council, representing the fourth district.

Dixon says she helped Pugh with her run for the council four years before and that they worked well together on the council. They had even attended the same church. So Dixon says when Pugh then challenged her for council president, it caught her by surprise.

“It did, particularly when I asked her, looked her dead in the eye and she said no she wasn’t,” Dixon says.

Pugh remembers making no such promise.

“I don’t think I even reveal to anybody what I’m going to do until I do it, especially when it comes to political office,” Pugh says.

Dixon easily defeated Pugh in the Democratic primary and from there, their careers took very different paths.

Pugh was appointed to the House of Delegates, then ran and won a State Senate seat in 2006. She currently is Senate Majority Leader. Pugh says she’s gotten 150 pieces of legislation through the General Assembly.

And that includes “everything from having moved the compulsory (school) attendance age to 18 to creating a payment plan for those who end up in the Maryland Automobile Insurance Fund,” she says.

Dixon remained council president until Mayor Martin O’Malley was elected Governor in 2006. She took his place, then easily won election as mayor the following year. During her tenure, crime went down, single stream recycling and the Charm City Circulator got going, and the city schools showed improvement.

But her political career came crashing down when she resigned from office in 2010 following a misdemeanor embezzlement conviction. Dixon took gift cards intended for poor children.

“There is none of us that are perfect,” Dixon says.  “And I know I’ve got to gain their trust back. But I also know that there are a lot of people in this city who know that I was a good mayor.”

Now Dixon is running to get her old job back in a crowded field of 13 candidates for the Democratic nomination. That field includes Pugh, who ran for mayor once before, and lost to Stephanie Rawlings Blake in the 2011 primary.

Early polls showed Dixon with a commanding lead over Pugh, who was in second place. But last week, a new poll done for the Baltimore Sun and the University of Baltimore gave Pugh 26 percent and Dixon 24 percent. That put the two in a statistical dead heat because it is within the poll’s margin of error. But Pugh says she will take the two point lead.

“I believe our message is resonating, moving the city forwards and not backwards,” Pugh says.

There is a school of thought that Dixon won’t be able to get more than around 25 percent of the vote because a lot of city voters aren’t willing to let her off the hook for her conviction and resignation. Dixon disagrees with that. And she also says Pugh’s poll numbers are built on political sand.

“Some of her numbers are very soft because another candidate who is running for mayor could persuade some of her people,” Dixon says. “I have a solid base.”

Pollsters like to remind us that a poll is a snapshot of a particular moment in time. The primary isn’t until April 26 and the numbers can change. The 11 other candidates running for the Democratic nomination are counting on it.