Mayor’s Race: Changes in Voting Could Mean a Long Wait at Polls 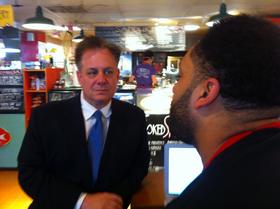 Remember the touch screen voting in past years? Well, forget about it. When you vote this time around, you’ll be marking a paper ballot, filling in ovals next to the candidates of your choice.

Consider it a trip down memory lane when you took those standardized tests with number two pencils.

Linda Lamone, administrator for the state Board of Elections, says the paper ballots will be fast, simple to use and leave a paper trail.

“It provides a permanent record of the voter’s choice for us here and allows us to do audits of the election,” she said.

Also new this year: you can register, then vote at early voting sites as long as you have a Maryland driver’s license or state ID.

If you haven’t heard much about all of this, it may be because the state Board of Public Works rejected Lamone’s request for nearly $2 million for voter education. Montgomery County State Senator Cheryl Kagan, a Democrat, says she’s worried that could lead to hours-long lines, like those in Arizona’s presidential primary last month.

“There may be a number of voters who are unprepared for the ballot and the machines,” she said. “There could be long delays.”

Lt. Gov. Boyd Rutherford, who chaired the board meeting that turned down the voter education money, said he thought the voters were smart enough to understand the changes.

Armstead Jones, the Election Director for Baltimore City, says there will be more steps for the voter this time around. Once you mark your ballot, you take it to a scanner. But if you made a mistake--say you filled in too many ovals—the scanner will kick out the ballot and you have to start all over again.

Jones said he would not be surprised to see long lines, both on primary day, April 26th, and at early voting.

“I wouldn’t doubt it,” Jones said. “Of course, this is the test. This is the first time we’ve had it, not only here in the city, but statewide.”

Of course, long lines are tied to voter turnout. Baltimore City is having a very competitive mayor’s race. And when you talk to candidates like businessman David Warnock, they will tell you they are feeling it: a lot of love from people who say they plan to turn out to vote.

“My instinct is yes, that there are people that are taking a much greater interest in this election because they have a clear choice,” Warnock said.

But Jones says he is not seeing a great ground swell of interest. He says changes in voter registration, things like address changes and switches in party affiliation, as well as new voters, have been averaging about one thousand a month since October, which is not unusual.

“We’ve done voter outreach all over this city,” Jones said. “And I send people out, they stay five hours. They may come back with three.”

Jones predicts a 35 percent turnout in the city. If he’s right, it will be higher than the last mayor’s race in 2011. He says he expects more voters because local offices—mayor and city council--will be on the ballot along with the President and Congress for the first time.

And speaking of ballots, there are 49 different ones in Baltimore City alone. That’s because City Council and Congressional districts are sliced and diced across the city.

When you vote, officials say it will help move things along if you have already familiarized yourself with the ballot. If you live in the city, you should be getting a sample ballot in the mail any day.

This coming Tuesday, April 5th, is the deadline to register to vote for the primary. You can do it in person or on line at the state board of elections web site, http://www.elections.maryland.gov/index.html. You can find sample ballots on the web site as well.