A Hung Jury, A Mistrial And Protests

TweetShareGoogle+Email
Listen
Listening...
/
A Hung Jury, A Mistrial And Protest 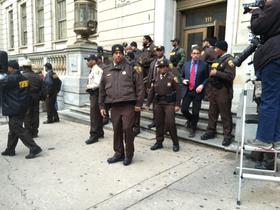 The trial of Officer William Porter ended in a hung jury Wednesday and not long afterward protesters took to the streets.

The drama began shortly after 2:30 p.m. when a buzzer went off in the courtroom, indicating that the jury had a note for the judge. During the near 45 minute wait the feeling of anticipation spread through the packed courtroom as Baltimore City State’s Attorney Marilyn Mosby arrived.

At last, the jurors filed in, took their seats and Judge Barry Williams announced they were hopelessly deadlocked. He declared a mistrial and dismissed the panel with the court’s thanks.

Porter, the first of five officers to be tried in the death last April of Freddie Gray, wasn’t convicted. But he wasn’t acquitted, either. And that means this could go on for a while.

"The prosecution can retry this case," said Attorney J. Wyndal Gordon.  In fact, Mosby could "try it over and over and over again until she gets a conviction, or there is an acquittal."

But, he said, the hung jury was a loss for prosecutors and Mosby might have to rethink her strategy in the future trials of the officers involved in Gray’s death.

"This conviction was supposed to be the lynch pin to the rest of the trials." Gordon said. "And without that conviction she has no leverage against Porter to use the testimony against any of the other officers."

But University of Maryland Law School Professor Doug Colbert saw it as a victory of sorts. He said prosecutors overcame harsh criticism they faced from those who thought bringing the charges represented a rush to judgment.

"The jury system is alive and working properly," Colbert said. "And the evidence suggests that the prosecution had a very strong case against Officer Porter."

Still, Colbert said, the defense gained something as well, knowledge of the prosecution’s strategy in the next trial.

Protests outside the courthouse started small; a few dozen people carried signs and chanted, but law enforcement was prepared, blocking the doors to the courthouse and at one point, traffic on a nearby street.

Sheriff’s deputies arrested an adult and a teenager for failing to obey orders and disturbing the peace with a bullhorn. The protesters expressed frustration that the jury didn’t reach a verdict.

"Justice hasn't been served yet," complained Michael D'Antuono, who came from New York for the trial. "Somebody killed Freddie Gray. He didn't kill himself."

D'Antuono, who is also an artist, passed out signs to other protesters that read, "Good cops don’t let bad cops kill defenseless citizens."

"I'm just angry that the defense would say, nobody follows the rule and because they don’t follow the rule this officer did not have to follow the rule either even though it resulted in the death of a citizen," Stokes said.

Activist PFK Boom watched as protesters gathered in front of City Hall. He said the only outcome that would satisfy him would be "when Freddie Gray comes back."

As the afternoon wore into evening, the crowds grew at City Hall; first a dozen, then a couple dozen, then as many as 100 chanting and marching around the building as helicopters circled overhead. Police officers took cell phone photos of the protesters--mostly teens and young adults—and the protesters recorded the police.

None of that felt right to Donna Brown, a police chaplain who came to this protest as an observer and peacekeeper.

Stumbling into a confrontation between a male police officer and a young woman protester, she began to question her own loyalties.

She said she might have to turn in her badge because she doubted "some of the motives" of the police.

"There are officers that I work with that are wonderful," she said, but "if something were to happen to that young lady, where am I in this?"

A young woman who had been singled out by officers was caught off guard and scared. Another young woman was trying to stand up for her. That bothered Brown.

But what bothered her even more was seeing two young, black women officers she knows personally who stood watching and didn’t intervene. "So, it really felt uncomfortable," she said, because police should represent themselves as "folks who really are in the interest of the community."

But while protesters were angry, Freddy Gray’s family urged calm.

In a news conference outside the Mitchell Courthouse, across Calvert Street from the courthouse where Porter stood trial, Richard Shipley, Gray’s stepfather, thanked the jury for its service.

He said the family is "not at all upset and neither should the public be upset." The jurors "did the best that they could."

Shipley said the family hopes Porter will be retried and that the next jury will reach a verdict. He also asked people to stay calm; sentiments echoed by Gray family attorney Billy Murphy. "If the family’s not angry, no one else should be angry," Murphy said. "And I think the family has a bigger stake in this than almost anybody else."

He called the mistrial "a bump on the road to justice." People who don’t think the mistrial was an injustice don’t understand the justice system, he said.