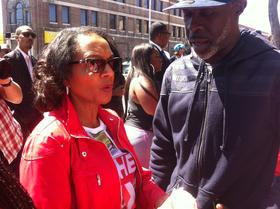 That’s what Theresa Jones said to Sheila Dixon, when she came across the former Mayor at the Unity Rally and March at Penn and North Sunday.

Jones promised Dixon she had her vote in the Democratic Mayoral Primary on Tuesday.

Dixon was stopped numerous times by well-wishers who said she had their support and asked for selfies.

Once the march was over, Dixon shot across town and did some old school retail politicking, going door to door on Elmora Avenue, near the Catholic High School of Baltimore. The campaign targeted that neighborhood because it has a high voter turnout and there are a number of people living there who are still undecided. Here is part of Dixon's pitch to those undecideds.

“No other candidate can go into city hall and get things moving and work with all of our agencies in a way that’s cohesive, comprehensive and that we’re all on the same team, we all have the same vision,” Dixon says.

Dixon has been running with an albatross around her neck, her 2010 resignation following her misdemeanor embezzlement conviction. Despite that she was running a close second to state Senator Catherine Pugh in the most recent poll, released earlier this month. And none of it matters to Elmora Avenue resident Brenda Smith, who made it pretty clear Dixon has her vote.

“I will stand butt butterball naked out in the middle of my street because that’s how much I want her back in there,” Smith says.

Dixon’s campaign believes it is that enthusiasm from her supporters that will help her carry the day on Tuesday. Dixon also believes there could be a strong turnout from people who usually don’t vote, and those voters may have been missed in the recent poll that gave Pugh a six point lead.