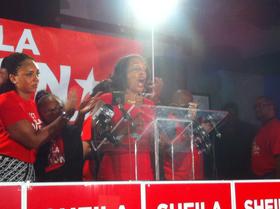 Despite her loss, former Mayor Sheila Dixon was feeling the love at her election night party. Her concession speech was interrupted several times by supporters shouting that they love her, and Dixon sent that message right back to them.

She held off conceding the Democratic nomination for mayor to state Senator Catherine Pugh until after Pugh had declared victory. Then Dixon dropped hints about her future as she put the wraps on her failed comeback attempt.

In her concession speech, Dixon congratulated Pugh on her win, but not on her campaign.

“Am I happy about the kind of campaign they ran? No,” Dixon said. “But you know what? We’re going to look forward. I’m looking forward.”

Dixon said everyone, including herself, needs to be part of opening a new chapter in the city.

“I’m not through yet,” she said. “And it is through your efforts that we will make a difference.”

As for what her future might hold, Dixon did not rule out another run for elected office.

“I’m not going to say what my plans are but right now I’m just going to take one day at a time,” Dixon said.

She was reelected in 2003, beating Catherine Pugh by around 21,000 votes. Then in January 2007 Dixon became mayor when Martin O’Malley left the office after being elected governor.

Later that year she won the job outright in an election. But it all unraveled in 2010, when Dixon resigned as part of a plea deal in which she was found guilty of misdemeanor embezzlement.

Now that her attempted comeback is over, Dixon says she’ll first get some rest. But she says she will remain engaged, involved, and be a part of the city.

“I have so much talent to offer this city and so you know I’m going to continue to work in the community,” she said.

Earlier in the evening, it was a festive atmosphere at the Dixon party, held in a sports bar. People shot pool and watched baseball on television and danced, and watched the returns.

Dixon was down 11 points when the early voting numbers were released. But Pugh’s lead shrank through the evening. Dixon’s campaign was banking on that. They knew they had ground to make up. But by 11 p.m it was over and Pugh claimed the win. Dixon lost by a little more than two points.

After she conceded, Dixon made the rounds, hugging, shaking hands and taking pictures with supporters like Gloria Pack.

Pack said she would love to see Dixon run for elected office again. But Ralph Moore, another Dixon backer, said she doesn’t have to hold elected office to make a difference. He said he hopes she finds a job “here in the city where her thoughts and energy and ideas will be put to use and the people of Baltimore in the heart of the city will be represented”

As for Pugh, Dixon said she hopes she’s up for the challenge and is able to be successful. And if Pugh wants her help, Dixon said, she can give her a call.