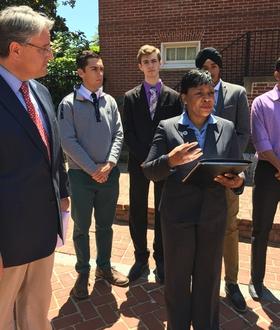 Gov. Larry Hogan has so far signed more than 475 bills the General Assembly passed this year. But with just one more bill signing scheduled this week, some Democratic legislators are worried that a bill that aims to offset the cost of college tuition won’t make the cut.

The legislation offers $5,000 tax credits to 1,000 people, and matching grants to 20,000 people who contribute to college savings accounts.

At a news conference Monday, Montgomery County Sen. Rich Madaleno and Baltimore County Del. Adrienne Jones stood in front of a small group of college students to urge Hogan to sign the bill.

“So here we are, just days before the bill signing, and we want an answer from the governor,” Madaleno said. “This is too important for our state’s future — for these young people’s future, for our state’s economic future.”

Hogan has repeatedly condemned budget mandates —legal requirements that the state increase spending year after year. This bill’s price tag is expected to grow to more than $15 million a year within four years.

Matt Clark, a spokesman for Hogan, said the governor is still reviewing the bill.

However, Clark highlighted an editorial in The Washington Post earlier this year that criticized the measure as “welfare for the wealthy.”