A Closer Look At Low Graduation Rates At Maryland Universities 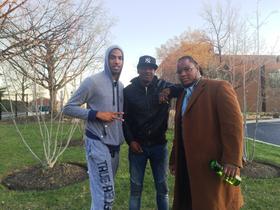 Public universities that serve low income students have struggled for years with low graduation rates.  Historically black colleges and universities, or HBCUs, including those in Maryland, face this problem especially acutely.

Three Coppin State University students, all in their mid-twenties, sit in their student union talking about the challenges of working toward a bachelor’s degree.

"My name is William Lessane. I am 27 years old. Technically at Coppin I’m a sophomore but right on the cusp of being a junior. I am from Baltimore City, Park Heights - West Baltimore area. To be honest with you, I’ve been in college for 10 years on and off. I’ve struggled in trying to achieve the associate’s degree. Now, I’m finding new struggles in trying to achieve the bachelor’s degree."

Lessane’s younger brother is in jail and soon to return home. Several family members have died in the past year. He says he’s not making excuses; he’s just faced challenges he could never have imagined. "When you’re from Baltimore, you’re trying to do things that have never been done before or at least you’ve never seen them directly in front of you," says Lessane.

He says his mom wasn’t educated in a traditional sense but she made sure her children knew the importance of school. Keon Elder is getting through college more quickly, but has faced challenges of his own:

"This is my 7th year of college. None of my brothers went college. I come from a family with of a high volume of drugs: whether they was an addict or they sold drugs. My first two years I started as CCBC. Coming out of high school, I wasn’t prepared - I didn’t know how to even apply for college," he says.

That's part of the reason he ended up at community college. Elder had a "D" average at The Community College of Baltimore County or CCBC. He says, "I did terrible my first two years; I can honestly say that. I transferred to BCCC, got a 3.5 there   only went for one year. And I transferred to Coppin, made dean’s list last spring. Got a scholarship and all that so I didn’t have to take out a loan."

Lessane and Cor Williams swap high fives with Elder. Williams moved to Baltimore County from Brooklyn ten years ago when he was 15.  "School was over after high school", he states. "I didn’t think there was anything after that. My mother was talking and she was putting in my head that I’d either have to go to school or do a trade."

Williams decided to become plumber which didn’t work out. So, he enrolled in community college at CCBC where he got into a fight and was kicked out. "It was like my mind wasn’t there," he says.  "I was given a second chance so I went to Baltimore City Community College. As the years progressed I started doing way better. Got very cool with an advisor. His name was Prof Vance - I was always inspired by him. He had 12 degrees. That was motivation for me to keep on pushing, keep on pushing."

Williams applied to a few schools and decided he wanted to go to an Historically Black College or University or HBCU. He expects to graduate from Coppin this spring with a degree in psychology.

Just one out of five Coppin students—20 percent—graduates within six years. The rate at Morgan State University, Baltimore’s other HBCU, is around 30 percent. That’s compared to a national average of 60 percent.

Dr. Ernest Steele, an associate professor at Morgan, says, "If you’re student who has been deprived structurally, systemically by the educational deficits in your geography, you simply aren’t as prepared and you do need more support."  It’s the university’s job to help students overcome those disparities.

Dr. Tiffany Mfume works on student retention and helping students finish on time at Morgan. She says two out of three need pre-college courses to prepare them for school, but she says that’s not necessarily holding them back.

"We’ve done research at Morgan to show that students who test into a developmental course and take it in the first semester earning grades of C’s better are more successful overall as far as their earned credits and cumulative GPA that 1st year, than students who didn’t need remediation at all," she says.

Students take these courses along with standard 1st year classes. Morgan also has a summer program for students who need extra help.

Still, across the nation students at universities are not finishing on time or at all: they get stuck taking remedial classes and are not only spending more on courses but losing the opportunity to earn an income sooner. Mfume says students and families need to know about a college and its expectations before they start.

"The open house visit for many families may be their first time on a college campus," she notes.

This year’s spring open house in late March starts with a welcome session and families break into groups to hear about the school’s majors. The nutrition and nursing session is packed with families and soon to be freshman or transfer students. A nursing major shares her experiences:

"I’m in my thirties so I work full-time. I have teenage child. I just have so many things going on outside of school that makes it so much more challenging for me to excel at school. But this is something that I really want."

Despite all the other barriers, Mfume says money is the biggest problem for students. "The day before you have to drop classes for non-payment: Oh, were over 8,000 students; this is so exciting. And then the deadline comes and you drop down to 6500 students now because there are 1500 students who couldn‘t make their financial obligation," she says.

Those 1,500 typically owed less than $2,000, even though Morgan has one of the lowest tuition rates in the state. The school now offers micro grants and Maryland’s Higher Education Commission has a program called “One Step Away” for students who need a small amount of money to finish their senior year.

The amount available for students across the state each year? $250,000. That can serve 125 students in Maryland.  Keon Elder says the expectations to earn money and earn it right away when you come from a poor household can make it hard to see the long-term potential.

"I don’t have an income. I’m taking 21 credits just to graduate, and I’m in doing an internship that I’m not getting paid for," he says. "Where I can fit work in?"

It’s a sacrifice Elder says he’s willing to make – but one that cuts deeper when your family has few resources. As tuition at public universities rises along with the gap in earnings between those with a high school and bachelor’s degree, continuing to support disadvantaged students in completing their degrees becomes more complex.