A Bright Spot In The Battle Against Chronic Absenteeism | WYPR
WYPR 88.1FM HD1

A Bright Spot In The Battle Against Chronic Absenteeism 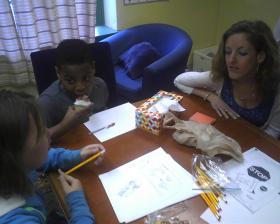 Listen
Listening...
/
A Bright Spot in the Battle against Chronic Absenteeism

At some schools in Baltimore city, 65 percent of students miss 20 or more days of school annually.

It’s so bad that Acting Superintendent Tisha Edwards recently put 61 principals on alert to improve their chronic absenteeism rates...or else.

But there are some bright spots. At 1.9 percent, City Neighbors Charter Elementary/Middle School has one of the lowest chronic absenteeism rates in the district. There are 216 students at City Neighbors. About 60 percent are African American and 50 percent receive free and reduced meals, not exactly the makeup one usually finds in schools with high attendance rates.

City Neighbor's principal Michael Chalupa says his chronic absenteeism numbers are so low because they stress close relationships with students. An eight-year veteran of the job, he says he makes sure he and his staff know all of the students by name. "Kids who enter in the morning, they get...anywhere between four and eight hellos from an adult before they ever reach their classroom," Chalupa said as he walked down the hallways, greeting students by name.

And when students are absent, Chalupa said, teachers make sure they know they were missed. "When they do come back...somebody is saying to them, 'hey, we really missed you yesterday. Where were you?'” he said. “That sounds little and simplistic, but we think that's really part of the key.”

So are parents. According to Chalupa, 96 percent of them attend PTA meetings three times a year and many volunteer at the school in some way. "We ask every family to contribute 40 hours to our school each year. Many do and there are some are still working on it, but that's a way for us to say we're creating this place together," Chalupa said.

City Neighbors was founded by parents nine years ago. Middle school assistant Trinisa Brown said the staff works hard to maintain and develop strong relationships with parents. "We're out in the morning to greet parents as they drop off kids," Brown said. "We talk to parents when they pick them up. If we don't see parents, we'll place calls or email them just to touch base. We even have a buddy system where new parents are paired with parents who have been with us a long time."

And when a student is absent a lot, school officials let parents know that's not acceptable. "Once they see it's a big deal to us, they make more of an effort to make it happen. We've had families that didn't think it was a big deal to come to school daily or on time, but we had to show them the impact on their learning," Brown said.

The school's social worker, Emily Snellings, says City Neighbors' small size makes it easier to deal with attendance problems than at the larger schools where she worked. "I couldn't get to everybody. We did what we could but a lot of it was just sending out letters, and I think the letters made parents feel someone was checking up on them, even if the letter said 'we're here to help,'" Snellings said. "I just feel like here we've been able to get to the heart of the problem a little bit quicker and a little bit deeper just because of the size of the community. We can find out quickly if a student has issues here and start to help right away."

The staff also tries to help students who are at “a big transition” in their lives, Chalupa added. "Whether it's homelessness, a shift in the family, like a death, or whatever prevents the child from coming to school, we try to connect with that family and figure out how we can help them solve the problem."

That might mean a teacher can pick up a student who has trouble getting to school or give extra help to a student distracted by a family problem.

In hallways and in the principal's office at City Neighbors, teachers are often seen giving students individualized instruction. Chalupa said they also try to make lessons reflect students’ interests so they will want to come to school. "For instance, third graders did a whole study on endangered animals,” he said. “They decided that's what they wanted to study and the teacher created a project around it.”

He said he’s not sure things like that alone would draw someone in, but those kinds of experiences “that we do every day” create an atmosphere that makes students want to be there every day.

That strategy is working for eighth-grader Brooke Unoko. "They take the time to put effort in our lessons and try new things and different ways of teaching us so it's interesting and not the same class every day,” she said. “It always seems like something interesting happens when I'm not at school." Brooke only missed a couple of days over the past few years and that was only because she was sick.

The same applies for eighth-grader Noah Bron. He attended two other schools in the past but said he did not have the special bond with those schools that he has with City Neighbors. "Everybody knows each other like a big family here and I look forward to seeing my teachers and students," Bron said. "It's like a place where you can come in and you can feel safe and I guess that's why a lot of people come every day."

Chalupa said it's also about creating a comfortable physical atmosphere for students. Some classrooms have colorful rugs on the floors and a few even have sofas and matching chairs, including the detention room. "We're constantly looking at how [to] pull our students in and create a place that they want to go every day, even on days when they're feeling icky or the weather is cold and all they want to do is pull the covers up," Chalupa said. "Is it perfect here? No. We have our moments. But when we notice a student missing a lot of school, we reach out to them as a community to let them and their family to let them know we care.

Empty Desks is made possible through a grant from Open Society Institute-Baltimore: investing in solutions to Baltimore’s toughest problems.

One School’s Battle with Chronic Absenteeism