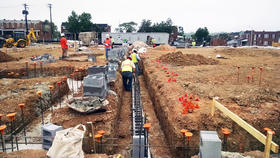 Baltimore’s school system has embarked on an ambitious project to renovate, replace and combine dozens of the oldest schools in the state over the next four years.

The $1 billion effort aims to shutter and combine dozens of schools and renovate or replace at least 23 – all by the spring of 2021.

A 2012 report by the Jacobs Project Management Company, a consulting firm, found that 85 percent, or 138 of the schools are in “poor” or “very poor” condition.

Mignon Anthony, executive director of the city’s 21st Century Schools building program, says, 60 percent of the city’s schools date back to the early 50s and “some of them are older than that.”

At Frederick Elementary School in the Mill Hill neighborhood of West Baltimore, they’re doing  “a full gut renovation of the existing building and adding a three-story addition,” explains Joseph Mayzck, a senior project manager with the Maryland Stadium Authority, one of the major partners for the initiative. That means crews have taken the building down to its shell and “everything will go back in new.”

The school, built in 1981, is one of the system’s newer buildings. But it has many of the same problems as the older schools: antiquated electricity and telecommunications systems, outdated and inefficient heating and plumbing and air quality issues due to inadequate ventilation.  On top of that, it doesn’t have air conditioning—like close to half of city schools. And like most schools, the building lacked drinkable running water because of old lead pipes.

Anthony says the conditions are not just because these schools are old but because “Baltimore City has not been funded for many years to properly care for their facilities on a daily basis.”

The city contributes roughly the same percentage of its capital budget to school construction as other districts in the state, but because it has a smaller tax base it has a lot less money. For example, the city’s local school improvement budget is about $17 million. Prince George’s county spends $112 million.

Frank Patinella, of the American Civil Liberties Union of Maryland, the ACLU says decades of under-funded maintenance and improvement programs have compounded the problems in the school buildings. And the system’s limited ability to keep up with maintenance helped propel the billion dollar project forward.

“This effort was intended to get beyond madness of putting Band-Aids on all of these schools,” he says. “You’re basically repairing systems in buildings that are rapidly decaying and what they need is a large investment so they can be brought up to 21st century standards.”

The program comes after 10 years of advocacy from groups like the Baltimore Education Coalition, ACLU and BUILD, who helped develop the campaign.  Former City School CEO Dr. Andres Alonso, City schools and later Mayor Stephanie Rawlings-Blake got behind it too.

The General Assembly approved legislation in 2013 authorizing the $1 billion in bonds that the city, state and the schools will repay at $20 million each every year for the next 30 years.

But, as Patinella points out, the state Board of Public Works’ vote to withhold $5 million dollars in construction money from city schools unless officials install portable air conditioning units in all its classrooms by the next school year just makes things harder. It ignores city school’s tight budget and its more pressing needs just to meet basic health and safety standards, he says. And it would cost $27 million to retrofit 2,000 classrooms.