The Bounce: Sports Talk with a Spin

A Fire in His Eyes

Growing up in Florida, Brad Snyder spent most of his childhood in a pool or at the beach. At the Naval Academy, he was captain of the swim team. In 2011 while serving in Afghanistan, Snyder lost his vision after a 40-pound improvised explosive device exploded in his face.

Remarkably, a year later, Snyder was back in the pool, this time at the Paralympics in London where he won two gold medals and one silver in swimming. In 2020 at the Tokyo Paralympics, Snyder again scored gold, this time in the triathlon.

Outside of his athletic career, Snyder is a PhD candidate at Princeton and the author of the memoir Fire in My Eyes.

The Bounce is produced by Jill Yesko and distributed by Your Public Studios.

The Bounce: Sports Talk with a Spin SportsParalympicsSwimming 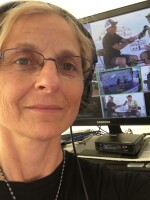 Jill Yesko
Filmmaker and journalist Jill Yesko is a former cyclist who represented the United States in the 1983 World University Games and competed in the Olympic Trials. Jill’s films include Tainted Blood: The Untold Story of the 1984 Olympic Blood Doping Scandal, Broken Trust: Athlete Abuse Exposed and the forthcoming Uphill Climb: The Women Who Conquered the Tour de France.
See stories by Jill Yesko