Lisa Snowden of The Baltimore Beat

Jason V. talks with Lisa Snowden, founder and editor in chief of The Baltimore Beat, a Black owned and operated nonprofit newspaper. Lisa grew up in Annapolis, Maryland, and after receiving her degree in journalism, she started her career on TV Hill. After years of honing her craft including a stint in the U.S. Virgin Islands, Lisa launched, then re-launched, The Baltimore Beat to provide local Black stories by local Black journalists, in an industry that routinely struggles with representation in the newsroom. 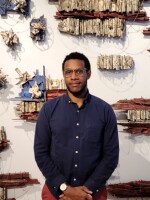