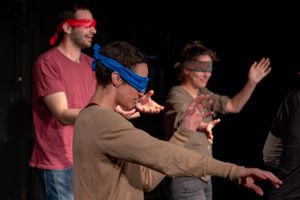 Every Saturday, you'll see a rotating of free comedy shows & events. The BIG Theater opened in October 2017 in Station North Arts & Entertainment District in the core of Baltimore City. The theater offers 3,000 square feet of space for live comedy shows; classes and workshops for adults, kids and teens; a podcast studio. ​Baltimore Improv Group host FREE comedy shows every night of the week including improv comedy, stand-up, sketch, and more. BIG currently serves as one of the largest arts education venues in the Baltimore area outside of a university. We teach improvisational comedy to adults and kids and everyone in-between. We teach improv classes to youth through the Young Audiences/Arts For Learning Maryland in the greater Baltimore area and throughout the state of Maryland. Baltimore City Paper readers named the Baltimore Improv Group as the best comedy outlet in 2017. In 2018, Baltimore Sun readers named BIG as Best Theater Company in the Best of Baltimore readers' choice poll. BIG provided high-quality instruction to more than 500 adults, teens and kids in the 2017 calendar year. In 2017, BIG entertained more than 6,000 patrons with 200+ improv comedy shows. We have strong partnerships with Johns Hopkins, Coppin State, Loyola University of Maryland, St. Mary's College of Maryland, Towson University, and University of Maryland Baltimore County Everyone likes to hang out with funny people, right? Baltimore has a home for hilarious, never-to-be-seen-again comedy. A place where you can be more than entertained. You you can also become a part of a community. ​A place where any night of the week you can catch a show, play board and video games, sip a stimulating beverage, and most of all, LAUGH! That's what Baltimore Improv Group (BIG) gives to our city. Won't you help us create it? Posted with EventRoar.com